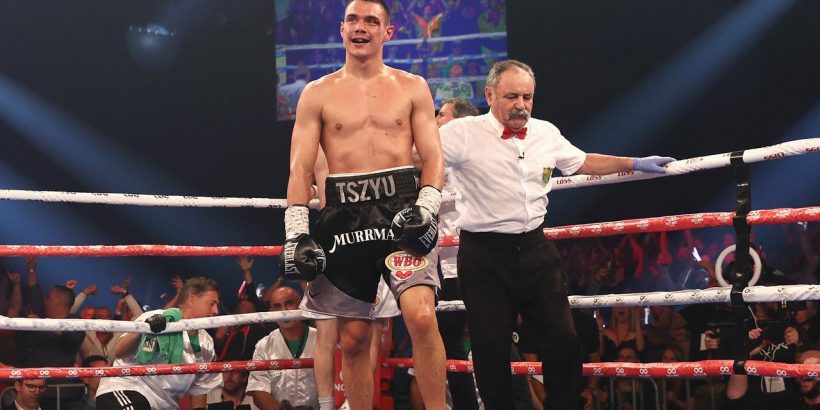 Everyone agreed Dennis Hogan’s corner did the right thing by throwing in the towel and sparing him from further punishment from Tim Tszyu — except a part of Tszyu himself.

While recognising Hogan’s corner had made a smart decision, the 26-year-old Aussie boxing star showcased the killer mindset he adopts whenever he’s inside the ring by saying he wished the fight was allowed to continue past the fifth round.

“I wish he didn’t (throw in the towel),” Tszyu said at his post-fight press conference. “I would have kept going.”

Tszyu’s manager Glen Jennings clarified that by explaining it was a fighter’s mentality.

“Timmy’s a fighter. He’s not going to stop until someone tells him to stop. There's no off switch with this kid, it’s as simple as that … so that towel had to come,” Jennings said.

“But in terms of Dennis Hogan the human and the terrific bloke we know he is, of course we believe it’s better he has another day to perform.”

Tim Tszyu is waved off by the referee after Dennis Hogan’s corner threw in the towel. (Photo by Cameron Spencer/Getty Images)Source:Getty Images

Tszyu was clinical in the five-round destruction of a legitimate gatekeeper, breaking down Hogan’s body before flooring him with a left uppercut to the head.

“I was three steps ahead of him. I knew when he was punching certain shots. I predicted it all,” he said.

The heavy rips to the body that broke Hogan’s spirit in a similar fashion to how Tszyu defeated Jeff Horn last year earned him a new nickname.

Tszyu revealed Hogan had delivered a short, classy message when they embraced in the ring.

“It was very respectful,” Tszyu explained post-fight. “He just said, ‘The hype is real.’

“He said that to me too,” Tszyu’s manager Glen Jennings added, “and it’s a wonderful little statement.

“I won’t use the language, but Dennis said, ‘Yeah, the hype is real.’

“He was very respectful.”