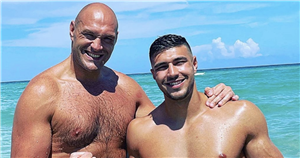 Tommy Fury has hit out at Jake Paul after failing to track down the YouTube star in Miami.

He wanted to hold showdown talks with Paul after the pair had spent weeks calling each other out for fight.

But Paul, who was in Miami last week for his brother Logan's press conference with Floyd Mayweather, was nowhere to be seen.

Fury said: "Jake Paul is the biggest b**** ever. I've flown halfway across the globe to Miami and searched high and low down every side street for him but he's nowhere to be seen.

"So Jake Paul, grow a pair of balls, come and see me and lets get it on."

Fury and Paul have traded insults since the latter won his third 'professional' fight, stopping Ben Askren in the second round.

Paul suggested he would fight Fury if his brother Tyson took on Michael Hunter on the same card.

But he later went cold on the idea and instead set his sights on fighting UFC star Nate Diaz – and told Fury he had to improve his record before he would entertain a fight.

"No-one has ever watched any of his fights, the only reason people know of him is because of me," he told ESPN.

"He started talking about me and his brother called me out on his behalf. No-one has ever watched a Tommy Fury pay-per-view so no-one knows if he will do numbers at the box office.

"His manager went on TV and said send the contract, 50/50… I was like, get out of here with that.

"This guy only has a name and has articles written about him because of me and you're asking for 50/50… take it somewhere else.

"Maybe when he fights someone with a winning record and a highlight performance then it makes sense for us to fight, but until then, move on.

"Everyone wants me to fight the best fighter in the world but that's not how this fight game works; you build up your experience and you fight people at the same skill level.

"A lot of people fluff their record; Tommy Fury has fluffed his record like crazy; you see it all the time in boxing.

"The next test for me is to go up against a real striker and we'll see what happens next."