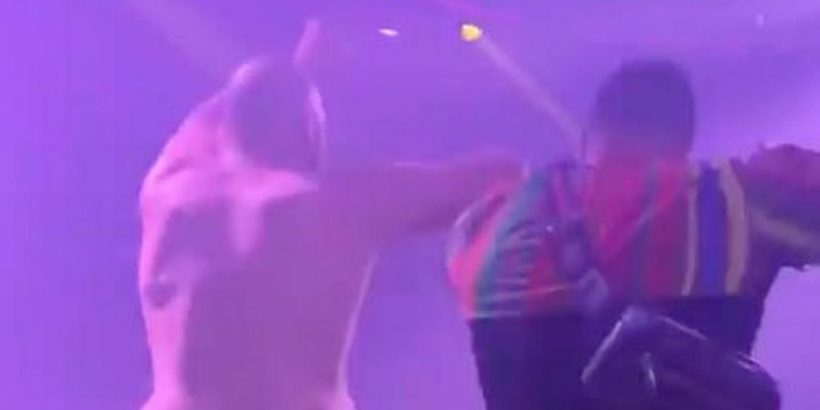 Tyson Fury has been filmed dancing topless on stage as he celebrates his epic defeat against Deontay Wilder.

Fury waved his hands in the air while clutching a drink at the Las Vegas venue as proud wife Paris watched on nearby.

The Manchester-born fighter rounded off his trilogy against the Bronze Bomber with an empathetic knockout in the 11th round to retain his WBC heavyweight title.

Later in the night, Fury was filmed by Paris who uploaded the footage to her Instagram, and cheekily stuck out her tongue to fans as she enjoyed the night.

In one clip Fury is seen dancing topless on stage to Queen’s We Are The Champions, to what looked like a packed crowd inside a venue. The following story showed the fighter raving to dance music while remaining topless.

Fury had sent his opponent sprawling in the third round but Wilder managed to land two tremendous right hands.

The American hung on all the way to the 10th round when Fury knocked him down. But it was the 11th in which the Bomber was sent back down to the canvas for good.

"I was down a couple of times, I was hurt, Wilder is a strong puncher," said Fury via BBC Sport.

"It was a great fight. I will not make any excuses, Wilder is a top fighter, he gave me a run for my money. I always say I am the best fighter in the world and he is the second-best

Who would you like to see Tyson Fury fight next? Let us know your thoughts in the comments section below

"Don't ever doubt me. When the chips are down I can always deliver."

The second of their trilogy took place on February 2020, and it was Fury who emerged victorious in the bout, winning via TKO in the 7th-round.

Last night’s fight surely rounded off the meetings between the two, while questions will remain over which opponent Fury will face next.