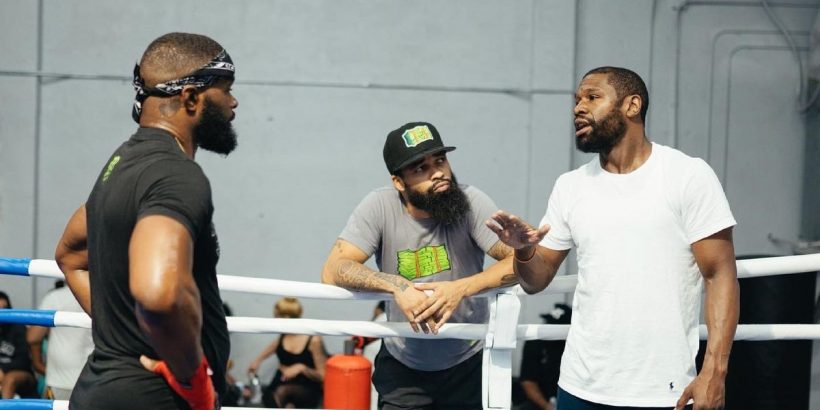 Tyron Woodley claims Floyd Mayweather was left impressed with his boxing ability when they trained together in preparation for his upcoming fight with Jake Paul.

Mayweather offered to help Woodley make a smooth transition from mixed martial arts to boxing ahead of his bout with Paul next month.

And in recent images posted to social media, it appears he made good on his promise, offering his decades of expertise to the former UFC champion.

Mayweather is one of the greatest fighters in the history of the sport, having gone 50-0 in his professional career that includes wins over the likes of Manny Pacquiao, Canelo Alvarez and Conor McGregor.

"He told me certain aspects he was very impressed with," Woodley told reporters at a press conference for his fight with Paul yesterday.

"I can't tell you right now what that aspect was because I'm going to be utilising, but he said, 'wow his game in this area is crazy, man' and I understand why.

"I put a lot of mental pressure on people and you can tell when I'm looking for you and pushing you and hunting you down which is going to transition well from MMA to boxing."

And he later told YouTuber 'The Schmo' that Mayweather expects Paul's game plan to be similar to his brother's when he fought the boxing legend last month.

But it remains to be seen if that is the case, with the younger Paul a much more fancied technical boxer than his brother, and Woodley a considerably less intimidating prospect in his boxing debut than Mayweather in his 52nd fight since turning pro.

"You know, Floyd Mayweather just basically told me, his brother Jake is going to do the same thing Logan did," Woodley told The Schmo.

"He just showed me the different opportunities and the windows that he saw open and basically gave me a system of what he thinks I should do and what I should work on.

"And I’m going to take that, I’m not gonna tell the people ‘cause Jake is a fan too, Jake’s going to be watching every video I do like he always does.

"And at the end of the day, I feel like the small things – not only from Floyd, but just all the OG’s in the boxing world – they kind of all gave me one or two things, one or two gems that I feel like I can go back and use.”

Woodley is a slight underdog going into the fight given the sizeable advantage Jake has in height, reach, and natural body weight, but he is viewed as a massive step-up in competition to his previous opponents.

The ex-UFC champion was a fearsome striker during his time with the belt, and managed to knock out Robbie Lawler and defeat top strikers like Darren Till and Stephen Thompson during his reign in MMA's top promotion.

But Paul is the more seasoned boxer, with nearly four years of high-intensity training under his belt with top coaches such as Milton Lacroix and BJ Flores.