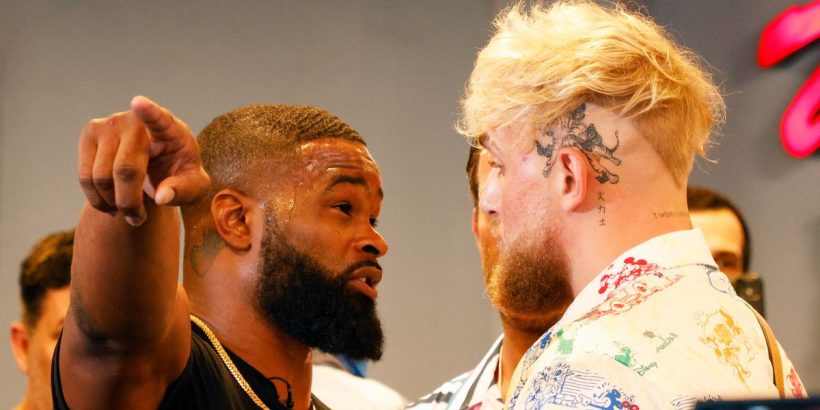 Tyrone Woodley has responded to Jake Paul's comment about his role in MMA labelling it as 'a move for clout'.

The former UFC champion has now retired from the company after having a successful career in the welterweight division with nineteen victories in the sport altogether, but is currently on the back of four consecutive defeats as he approaches his debut in the boxing ring.

With high stakes already being made during the build-up, Woodley prepares for arguably one of the biggest paydays of his career when he takes on YouTube sensation Paul in a professional counting bout on August 29 in a pay-per-view clash.

But Woodley has responded to a comment that Paul made on Instagram made when he posted: "I am doing more for MMA than Tyron is so shouldn't they back me?"

The 39-year-old labelled the words as being 'utilised for clout' in an interview with Curran Bhatia on the latest episode of Ask the Experts.

"He's utilised the clout he can get, you can't do more for a sport than someone who was there.

"I created the bag, I created Champ Camp and I showed people how to document their own content, I was the one who showed fighters that they can pursue their careers in fighting not just in one lane.

"Also during my time in the UFC, I fought the toughest competitors in one of the toughest divisions, taking on the top contenders without complaining.

"I represented the UFC with class, with humility and all he has done is raise some money on a GoFundMe page, so if he wants to actually be rewarded do it in private and it will come after publicly."

Who will win- Jake Paul or Tyrone Woodley? Comment below

Paul has won the three fights to date in his career stopping YouTuber AnEson Gib, basketball player Nate Robinson and UFC star Ben Askren in his contests to date, but his showdown with Woodley represents his toughest contest to date.

And the 24-year-old believes that Woodley is 'dangerous' but has revealed he is confident of getting the job done, and moving on to a potential bout with British light-heavyweight Tommy Fury.

“No matter how good Tyron is, I’m gonna still go in there and get the W. But yeah, he is serious, and we’ve taken him more serious than any opponent thus far," Paul told MMA Fighting.

"People forget that boxing is the first form of martial arts.

"When the bell rings in MMA, it’s two guys standing on their feet. It’s a skill that Tyron’s been practicing way longer than I have.

Paul's confidence has been expressed when he posted a copy of his boxing 'hit-list' which included the likes of Canelo Alvarez, Nate Diaz and current UFC welterweight champion Kamaru Usman.

The American star has already expressed his desire to fight Irishman Conor McGregor in the boxing ring, and believes he has formulated a plan to defeat the UFC star in a 'massive' fight in the future.