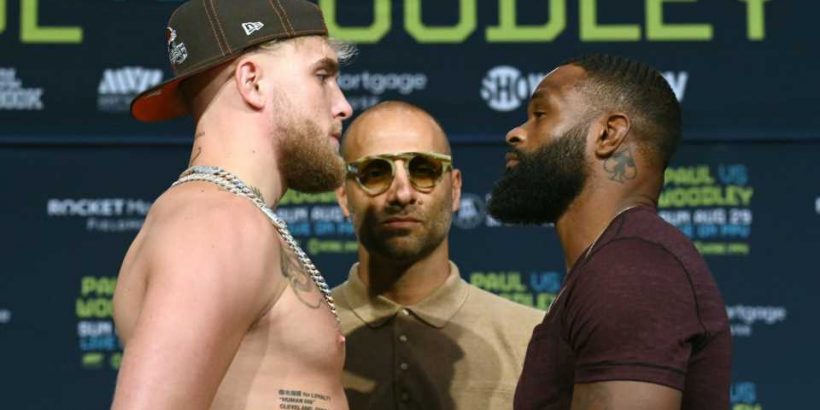 A scuffle broke out between the camps of former UFC welterweight champion Tyron Woodley and YouTube star-turned-boxer Jake Paul after one of Paul’s team members was accused of trash talking Woodley’s mother during their final press conference on Thursday afternoon.

In a video from Sporting News writer Andreas Hale, Woodley became upset when a member of Paul’s camp, dressed in an orange shirt with a backwards black cap, said unspecified words to Woodley’s mother, who was in attendance.

“You talking to my mom, bro?” Woodley said while standing in a scrum in front of multiple podiums. ““I’ll f— sleep you right now.”

Behind Woodley, Paul was trying to antagonize him, saying, ‘“Do it then. Do it then, b—.”

The video then shows Woodley’s sister approaching the man who allegedly spoke to their mother. After some initial back-and-forth dialogue, she is observed pulling up her leggings and yelling to the man, “Let’s f— go!” in what appeared to be an effort to fight.

Another video obtained by Barstool Sports shows Woodley’s sister saying, “Don’t say s—, ever!” Meanwhile, Woodley was being held back on the opposite side of the room, saying he wanted an apology for the incident.

After the altercation, Woodley was made available to the media and said the alleged situation with his mother “will not be tolerated.”

“I addressed his camp because they’re a whole bunch of f— goofies, and they are,” Woodley said. “At the end of the day, they didn’t like what I said, well, s— is the truth. So they started going back and forth and talking, which they are more than willing to do. But you’re not willing to do is f— talk to my mother in any type of way.”

Woodley also said there was “nothing” the Paul camp could do to make him any more violent for his fight with Paul, which will air on Sunday at 8 p.m. ET on Showtime pay-per-view.

“I was already at the max level, I was going ‘100’ regardless,” Woodley said. “There’s nothing that they can do to make me, ‘Now, I really got to go because he said something to my mom.’ I was already there, I was already in kill mode. So at the end of the day, that’s going to be handled and I’m back to focusing on the fight.”