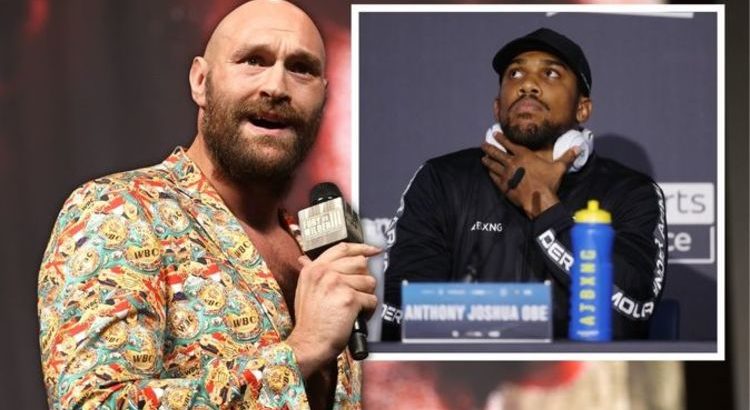 Tyson Fury 'has his mental health under control' says Paris

Tyson Fury has responded to Anthony Joshua’s denial that he has agreed a fee to allow the Gypsy King to face Oleksandr Usyk before him by aiming another barb at his fellow Brit. It comes as Fury is seeking to strike deals with Joshua and mandatory challenger Dillian Whyte to be able to take on Usyk in an undisputed face-off.

It’s the biggest story in the heavyweight boxing scene, as the main players all negotiate over what happens next when it comes to the titles.

Currently they are held by two men, with Fury and Usyk boasting the belts that everyone wants to have among their own collections.

Fury has held his since 2020, and successfully defended them against Deontay Wilder in a slugfest for the ages last October.

His next opponent was due to be Whyte, the WBC’s mandatory challenger, but talks over the details of their meeting were delayed by a dispute Whyte had with the boxing body over his purse split.

It looked as though that had been resolved, but now there is talk that the all-British fight might not take place at all as Fury seeks the ultimate prize.

He wants to hold all the heavyweight titles, so he can call himself the undisputed heavyweight champion of the world.

Standing in his way is Usyk, who shocked Joshua in London last year to take the WBA, WBO, IBF and IBO titles from the man from Watford.

He too would undoubtedly like to complete the set, but both their ambitions are currently being blocked by the fights they are obliged to honour.

Fury’s mandatory challenger Whyte must come first and Usyk is contracted to a rematch with Joshua before taking on anyone else.

That could all change if Joshua and Whyte both agree to step aside.

Not only would both demand a princely sum of cash to do that, but they would both also want guarantees that they will get their title shots at some point after the fight between Fury and Usyk.

It began to look as though they had come to an arrangement, as reports emerged that they were demanding £20m between them to give up their rights to a challenge for now.

Some reports even went as far as to say Joshua was on the brink of accepting a £15m offer to wait a little longer for the chance to get his belts back.

But then the man from Watford took to social media to debunk those rumours, branding them as “bulls***”.

“I’m hearing people saying ‘AJ accepts £15m to step aside.’ I ain’t signed no contract – I ain’t seen no contract,” he declared in a video.

“So as it stands, stop listening to the bulls*** until it comes from me, I’m the man in control of my destiny, I’m the man that handles my business.”

Fury has now responded to those claims from Joshua by conducting a poll among his own fans.

The Gypsy King asked his Instagram followers if they thought Joshua would step aside, referring to AJ as a “bum” in the process.

Alongside the ‘yes’ and ‘no’ answers on his poll, Fury also included a third option with another dig at his British rival – ‘I’m injured’.

As it stands, with no step-aside agreements in place, Joshua is still set to fight Usyk in a rematch later this year while the Fury and Whyte camps will have to come to an agreement over their meeting.