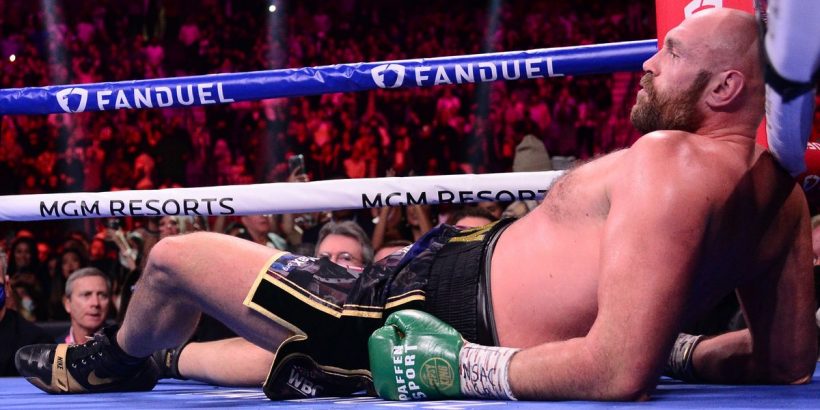 Tyson Fury remained confident of victory despite being dropped twice by Deontay Wilder in Las Vegas.

The 'Gypsy King' remained lineal champion, when he secured another stoppage victory over his bitter foe in the eleventh round.

And the spectacle was labelled by many as 'fight of the year', with Fury also dropping to the canvas twice.

But the 33-year-old has admitted he remained positive from the brink of defeat, and immediately considered his response.

"He caught me twice in the fourth round. I was never thinking 'this is over'," Fury said after the trilogy clash. "I was thinking 'ok, good shot, but I will get you back in a minute' and I did.

"It's not about how many times you get put down, you've got to keep moving forward in a positive manner and keep fighting. Not just in a boxing fight, but in life in general."

Despite the three-minute scare, Fury was able to recover and out-land his opponent for vast periods of the fight.

And his increasing pressure paid off in the tenth round, when he splattered his opponent on to the canvas.

Although surviving the round, Wilder faced a final period of turmoil and was sent crushing to the deck again by Fury in the penultimate stanza.

Which ultimately he was unable to stand from, handing Fury a comeback victory of sorts in an eye-catching encounter across the pond.

Is Tyson Fury the greatest heavyweight of the modern era? Let us know your verdict in the comments section below.

And the 'Gypsy King' continued with a joyful assessment of the fight, declaring the meeting of his intentions in the ring.

"I give him the glory for the victory. He’s a tough man," Fury said after the test. "He took some big shots tonight. It was a great fight, as good as any trilogy in history.

"I beat him three times and I’m a sportsman and wanted to give him some love and respect. And he didn’t want to give it back. That's his problem and I pray for him.

"This was a great fight and October 9, 2021 will go down in history, I hope. I always said I was the best in the world and he was the second best. Don’t ever doubt me. When the chips are down, I will always deliver.

"And I want to say if it wasn’t for Sugar (Hill), America's and Detroit's own, I wouldn’t have gotten through that fight tonight. He told me, he said get your jab working, big guy, and throw that right hand down the middle. That's how the big dogs do it."

Fury now could look to his five-fight hit list for his next heavyweight test, as he continues his illustrious career.

But Dillian Whyte has jumped to the front of the queue, having been declared WBC mandatory challenger for Fury's belt next.

Wilder was taken to hospital after the fight, with his career left in a sea of uncertainty after coming up short again in the trilogy.