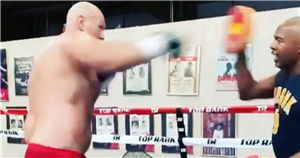 Tyson Fury has sent another chilling message to Anthony Joshua despite promoter Bob Arum’s claim that their heavyweight mega-fight is now “dead in the water”.

Fury and Joshua reached a two-fight agreement back in March, but negotiations over the site deal for their first encounter has dragged on for the last month.

The Gypsy King’s US promoter Arum has told The Telegraph that a summer clash in Saudi Arabia is now highly unlikely, instead urging both fighters to turn their immediate attention elsewhere.

However, his man has appeared to indicate that the fight everyone wants to see is still in the works.

Fury, who is going through the gears out in Las Vegas with head coach SugarHill Steward, has uploaded fresh training footage on Instagram which shows him firing some explosive shots on the pads.

He is clearly in tremendous shape and form right now, whipping home a series of brutal right hands and accompanying it with a warning for Joshua.

If they do collide in the summer, Fury and Joshua will be battling it out to become the first undisputed heavyweight champion in over two decades.

AJ’s promoter Eddie Hearn is still supremely confident we will see it happen this summer, shutting down claims from Arum that it is falling by the wayside.

“I saw the comments last night from Bob Arum. I messaged him last night and said, 'Is there something you want to tell me?’” Hearn told Sky Sports.

“We last had communication on Friday of last week and Thursday. He said in the interview, we haven't spoken for two weeks, yet five days ago he was telling the world it was a done deal.

“I think he's trying to put pressure on. We're a couple of days later than expected. The situation is still the same.