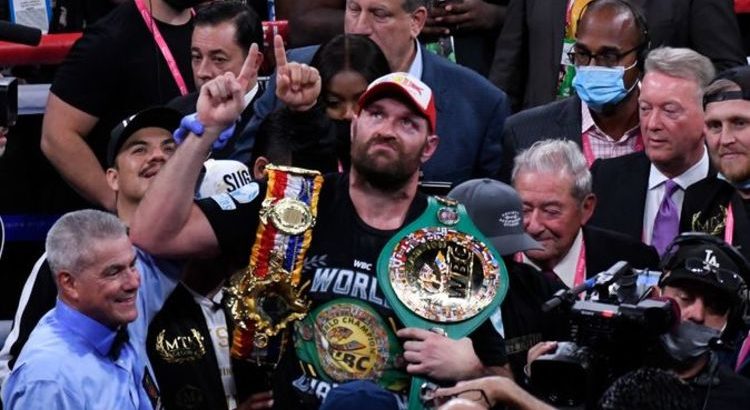 Where does Tyson Fury’s win leave the world heavyweight scene?

Former fighter Carl Froch has revealed that he feels Tyson Fury could retire from professional boxing after his heavyweight title victory over Deontay Wilder, as he has ‘nothing left to do’.

Fury proved victorious for the second successive time against his arch-rival Wilder, after knocking out the Bronze Bomber in the 11th round to cap off one of the greatest heavyweight fights this century.

Following the win Froch has taken to his Sky Sports column to voice his opinion on the bout, and spoke about how he feels Fury could well retire as he has now reached the pinnacle.

Froch said: “There is nothing left for him to do. I wouldn’t be surprised if he retired.

“Depending upon how much he loves the sport, and how much he wants to go in there and do it all again. I wouldn’t be surprised if Fury says: ‘I have done my bit and now I am finished’.”

Despite tipping Fury for retirement, Froch himself would love to see the fighter carry on and eventually fight fellow heavyweights Anthony Joshua and Oleksandr Usyk in the future.

Joshua and Usyk met themselves last month and it was the latter who ran out champion, as he put on a boxing masterclass to defeat the Englishman on points in front of 65,000 people on his opponent’s home soil at the Tottenham Hotspur Stadium.

British boxing fans across the nation had hoped to see Fury and Joshua face off in an all-English fight, however ‘AJ’s’ recent defeat to Usyk means the pair will meet in a rematch before either gets a shot at the Gypsy King.

In what is deemed a hugely exciting time for heavyweight boxing, Froch hopes that Fury will get to take on both Joshua and Usyk at some point down the line.

“As a boxing fan, I want to see Usyk take on Fury. I don’t think he can do it – I think Fury is too big, too clever for him.”

Despite this the 33-year-old’s most likely next opponent could well be Dillian Whyte, if he is to get past Otto Wallin at the end of this month.

As a result, the winner between Whyte and Wallin will be deemed as the mandatory challenger to Fury, if the Gypsy King’s team are unable to strike a deal with Usyk within 28 days of his Wilder win.

And, with Usyk now facing Joshua in a rematch, it seems Whyte could well be next in line.

However Fury’s dad John believes his son should not have to face the fellow Brit, and instead take on Usyk.

Fury Snr told TalkSport: “It’s Usyk next, or nothing. I wouldn’t bother with the rest of them, they’re not in Tyson’s class.

“Would Dillian Whyte deal with Deontay Wilder? No. So why would they wanna put him in with my son and get him knocked out? Tyson can’t get up for them kind of fights. For me, I’ve told him, Usyk or don’t bother.”