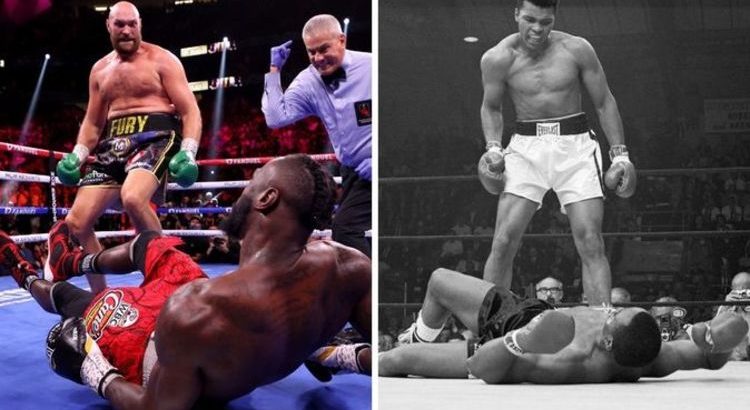 Last night, Fury cemented his place at the summit of heavyweight boxing by knocking out Wilder in the 11th round to defend his WBC title. The Gypsy King dropped Wilder in the third round, before coming off the floor twice in the fourth in a heart-pounding contest in Las Vegas. Fury, who has defied expectations throughout his career, then roared back from near defeat to knockdown the Bronze Bomber in the 10th and knock him out in the 11th.

The 33-year-old was fighting Wilder for the third time, having completed one of the most remarkable sporting comebacks in history when he knocked out the Alabama-native in the seventh in February 2020.

In December 2015, Fury was stripped of his WBA, WBO and IBF titles and quit the sport after a public battle with mental health problems that resulted in addiction and extreme weight gain.

Yet after last night’s fight, Fury, who also retained his lineal champion status, told BT Sport that he had bridged the gap between a “champion” and “a great” with his dismantling of Wilder.

He said: “I’m now the greatest heavyweight of my era without a doubt.

“I came to America (for) my last six fights and fought the most devastating puncher in the history of our sport not once, not twice but three times.”

In 2015, the notoriously confident and outspoken Fury didn’t shy away from comparisons with Ali, who is frequently ranked as the best heavyweight boxer of all time.

When asked if he was the “most charismatic, most colourful, most controversial” champion since the Kentucky-born boxer, Fury said: “I would say I’m a modern day Muhammed Ali.

“But I’m not trying to be him ‒ I’m being Tyson Fury because I wouldn’t want to be any man, only myself.

“I don’t look up to anybody ‒ only myself and God.”

Ali was involved in a number of historic fights, most notably against Joe Frazier, who he took on in the Fight of the Century and the Thrilla in Manila.

Ali’s bout with George Foreman, known as The Rumble in the Jungle was also watched by an estimated one billion people across the world.

Like Fury, the boxer also thrived in the spotlight, and would be provocative and outlandish to get in the head of his opponents.

Ali was ranked the greatest sportsman of the 20th century by Sports Illustrated and was crowned the Sports Personality of the Century by the BBC.

Fury too has fought in some of the most iconic bouts of his generation including against Wladimir Klitschko in 2015 and the three fights against Wilder.

He added in the BBC Sport interview: “I don’t think there’s anyone else like me in boxing in any of the divisions, especially now with Floyd Mayweather and everyone getting on a bit.

“It’s time for a new era and the new guns to be involved in the division and that’s me.

“I do do some crazy stuff, I have done it in the past and I’ll continue to do it so if it makes people happy and puts a smile on their face it doesn’t do me any harm.

“It doesn’t cost me anything to be a little bit entertaining for the fans.”

After yesterday’s stunning victory Fury serenaded the crowd with a rendition of ‘Walking in Vegas’ while Wilder swiftly departed to hospital to undergo precautionary tests.

There are a number of options for the Morecambe native’s next fight, including WBC mandatory challenger Dillian Whyte, while the victory also pushed him closer to an undisputed bout against either Anthony Joshua or Oleksandr Usyk.

Fury is ranked the world’s best active heavyweight by ESPN, the Transnational Boxing Rankings Board and BoxRec.