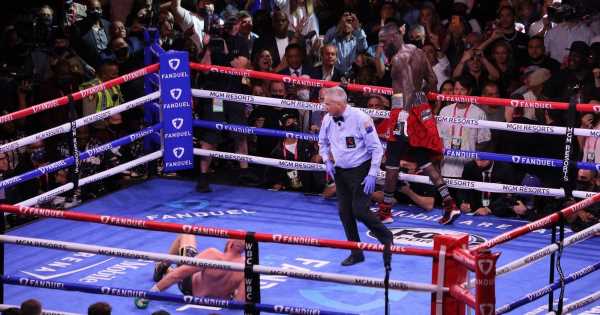 Tyson Fury 's former coach Ben Davison has outlined the last-second adjustment which saved Fury from being knocked out against Deontay Wilder.

Fury was knocked down twice by Wilder in their trilogy fight last weekend, but the Brit rallied to stop his rival in the 11th round.

It was Fury's second fight under SugarHill Steward – the nephew of legendary trainer Emmanuel Steward – having parted ways with Davison after his edgy 2019 win against Otto Wallin.

Fury credited Steward's advice for the stoppage win, with his trainer advising him to stop "messing around" and to be ruthless late on.

Davison – who is still on good terms with his former fighter – said Fury's ability to brace before the punch connected was what allowed him to get back up.

He tweeted: "The instinct and timing to brace upon the impact and only give his forehead, tucking his chin down was the key to being able get up!"

Fury defended his WBC title for the first time with the win and will likely fight mandatory challenger Dillian Whyte next if the Brit can get past Otto Wallin on October 30.

And Davison thinks Fury ability to make adjustments throughout the fight was the key to his emphatic win.

He told iFL TV : "I don't think fundamentally and tactically it was the best performance from Tyson. However, in terms of character, determination, mental fortitude all these kinds of things it was a top top performance.

"Everybody knows he's got that in him he's showed that time and time again. That's why he's still undefeated. He's so versatile, he made adjustments throughout the fight, remained up tall.

"He was getting clipped on the end of right hands but started getting underneath the right hands which allowed him to get close then fight inside of Deontay Wilder where he was dominating."

Should Deontay Wilder fight again after being stopped again by Tyson Fury? Let us know in the comments section below

Wilder promised he would be a different fighter in the trilogy, specifically working on targeting Fury's body to slowly break him down.

But the American seemed to ditch that tactic after the first round and Davison thinks Wilder was forcing his new gameplan too much.

He continued: "He looked sharp but he looked like he was forcing things. It was always very clear from the onset that he wasn't gonna be able to maintain that pace.

"He didn't just jump in the one two. He was trying to set it up with the jab to the body, but not the most discreet with it. I don't think the added weight done him any favours.

"It's funny because out of a loss, it's a career defining performance for Deontay Wilder because you can never ever take away what he's made of. He always said he's willing to go out on his shield and that's what he done."