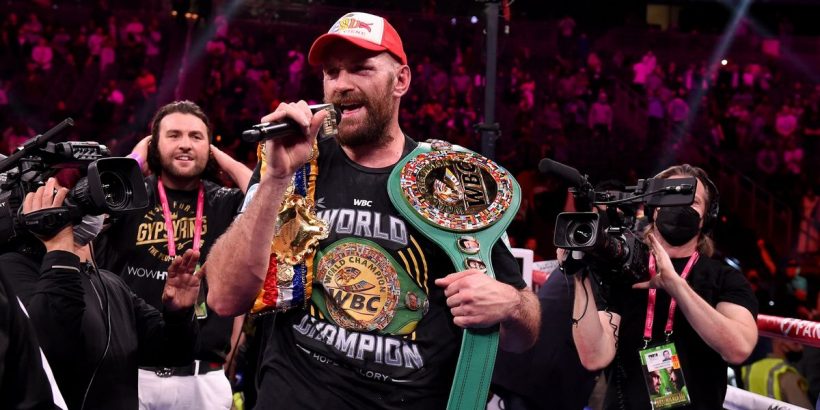 Tyson Fury's five-fight wish list has taken one step closer to completion after his victory over Deontay Wilder.

The 'Gypsy King' took another step into heavyweight supremacy with an explosive stoppage of Wilder in Las Vegas.

And he was forced to respond from the jaws of defeat, after being knocked down twice in the fourth round.

But in victory he took one more step to making his five-fighter wish list a reality, that he named in the build-up to the clash.

“I have a bucket list and my next five fights in mind," Fury previously told BT Sport Boxing. "I am going to have a December fight after this, because Joshua won’t happen then, it’ll happen in March.

“It’s Wilder on October 9 – Dillian Whyte in December in a UK stadium where I will shut him up once and for all. Then Joshua in March in Saudi Arabia and then a rematch back here in Wembley. Then I will fight Chisora in my fifth and final fight.”

Whyte now looks increasingly likely to be his next foe, after he was also declared WBC mandatory challenger and enforced as next in-line.

But his famous rival's meeting with Joshua could now be on a delayed time-frame, with 'AJ' needed to search for redemption against Oleskandr Usyk next year.

And Fury had already had to deal with the heartbreak of missing out on a multi-million payday to face Joshua for the undisputed crown.

The rivalry between Whyte and Fury has sparked on social media recently since the callout, as the pair look set to cross paths.

Will Tyson Fury beat Dillian Whyte next? Let us know your verdict in the comments section below.

But the 'Body Snatcher' must defeat a rugged Otto Wallin later this month, to secure his long-awaited world title tilt.

However Fury did not overlook his fight last night, and joyfully celebrated a historic second victory over Wilder.

His trainer called for more after his worrying double-knockdown and he delivered a hammer blow in the eleventh round.

The referee raised his hand in glory again, after a huge right hand crushed Wilder's hopes of redemption.

But Fury was critical of Wilder's post-fight reaction that he believed "lacked sportsmanship and respect".

"I'm a sportsman, I went over to [Deontay Wilder] to show some love and respect and he didn't want to show it back," Fury said after his victory. "I will pray for him so that God will soften his heart."

"He's got no love for me, Deontay Wilder, and do you know why? Because I beat him three times.

"It was a great fight tonight, worthy of the best trilogies. I will not make any excuses, Wilder is a top fighter, he gave me a run for my money. I always say I am the best fighter in the world and he is the second-best.

His opponent is now currently in hospital after his brutal knockout blow in the penultimate round.

And he reacted bitterly to Fury's claims of lacking in respect, despite admitting afterwards that he "wasn't good enough" on the night.

Fury now is the leader of the heavyweight pack, and is set to face a raft of callouts from all angles including YouTube star Jake Paul.