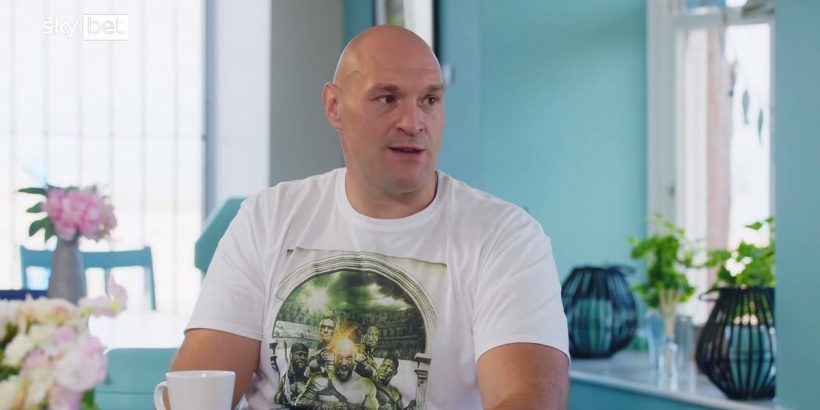 Tyson Fury gave the perfect response to a video of British rival Anthony Joshua saying he will ‘smoke’ the Gypsy King.

The two British heavyweights own all four world championship belts between them and have been mooted to fight one another for years.

A deal was supposedly close to being struck earlier this year with a fight to find the undisputed champion of the world.

However, complications arose when Deontay Wilder triggered a clause forcing the American to fight Fury for the third time in their epic saga while Joshua will face Oleksandr Usyk later this month at the Tottenham Hotspur Stadium.

When shown a clip by former England and Manchester United right back Gary Neville of Joshua saying he will ‘smoke’ Fury, the 33-year-old simply laughed the suggestion off.

“He hasn’t got the minerals to fight a man like me.

“I said to Eddie Hearn that the difference between me and him is he’s a businessman and I’m a f****** Spartan. I’m going to show him that when he’s in the ring.

“I will absolutely annihilate that bodybuilder. He won’t go past six rounds – it will be over quickly.

Do you think Anthony Joshua would defeat Tyson Fury? Let us know in the comments section.

“He knows it, and his whole team know it and that’s why Eddie Hearn has been steering round me for the last 10 years.”

The Gypsy King later admitted he respects Joshua for escaping a rough background to excel in boxing, becoming not just a champion but a key ambassador for the sport.

Fury then laughed at how Joshua used to be a fan of his before his success led him on a path that means the two are sporting rivals, and even claimed the 2012 Olympic champion used to follow him on Instagram.

Fury, whose cousin Hughie recently declared himself ready to become a contender for a world championship belt, claimed he will happily throw his title 'in the bin' if it means he can secure a fight with Joshua.

When Joshua was on the same show and asked a similar question by Neville earlier in the summer, the 32-year-old said he would also fight Fury without titles on the line in order to ensure the highly-anticipated bout actually happens.

Joshua will be in action and defend his IBF, WBA and WBO titles against Usyk on September 25 while Fury will put his WBC title on the line against Wilder in a grudge trilogy fight a few weeks later on October 9.

Fury's date with Wilder was delayed after the British boxer tested positive for Covid-19.