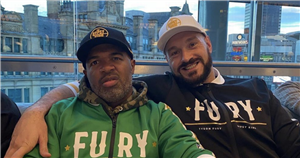 Tyson Fury’s trainer has told what Anthony Joshua to expect when they finally meet in the ring – and even tried to offer him a few coaching tips.

SugarHill Steward, who took over the role with Tyson following his split with Ben Davison before his rematch win over Deontay Wilder, has spoken out following reports that a deal has been agreed.

The former Detroit police officer has even offered WBA (Super), IBF, WBO, and IBO heavyweight champion Joshua some advice on what to expect from his fighter.

However, all is not as it seems, with SugarHill essentially warning the 2012 Olympic Gold Medalist that he could come up against one of many completely different styles.

SugarHill, speaking via the MyBettingSites.co.uk blog, said: “Tyson’s unpredictable in the ring, he does not know what he’s going to do next. Maybe he will just come out and just box [versus Joshua].

“Who knows what the game plan will be. Everybody has to think about so many different things with Tyson.

“Is he going to come out at you or not? Now you have to train two different ways; somebody coming at you and somebody boxing you. It starts to get a little difficult then preparing for something like that.

"You have to prepare for so many different styles with Tyson Fury, that makes things a lot more difficult.

“I am eager to prepare for anybody whether it’d be Anthony Joshua, Deontay Wilder, I'm eager to do that with anybody. That’s the excitement, that’s the thrill. It’s like a rush.

“It’s like when you don’t drink cola for a while and then you take that first sip with all the bubbles and it’s like ‘woah’ – it’s so delicious and so good.”

Eddie Hearn told ESPN of the deal this week: “We’d like to get a site deal confirmed in the next month.

“The hard part is always getting everybody to put pen to paper. But this was a major effort from all parties to get this over the line.”

READ MORE: Abramovich to break his personal rule so Chelsea can sign Haaland