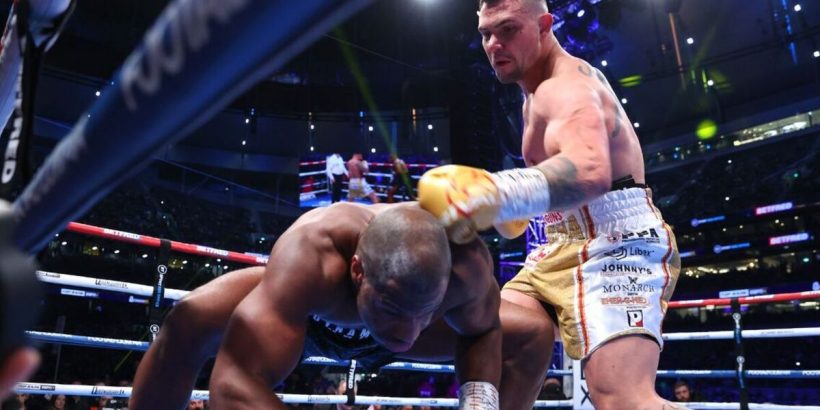 Daniel Dubois picked himself up off the canvas three times in the first-round last night to stop Kevin Lerena in the third – retaining his WBA (regular) heavyweight title in the process. But there was wild confusion among fans after the fight as to whether the contest should have been permitted to go on under the WBA rule set.

The major sanctioning body has a three-knockdown rule which means that if a fighter is downed three times in any round, then the contest will automatically end via TKO.

“It is critical to note that in bouts governed by the WBA rules three (3) knockdowns in the same round automatically end the bout by TKO. Also, WBA rules specify that the bell cannot save the fighter in ANY round,” reads the WBA referee manual.

However, the British Boxing Board of Control does not permit the rule in fights under their auspices, allowing Dubois to launch his spirited comeback. Dubois now finds himself in a primed position to face the winner of the proposed undisputed fight between Oleksandr Usyk and Tyson Fury.

According to the sanctioning body rotation system, the WBA is next in line to push their challenger for the unified titles held by Usyk (WBA, WBO, and IBF) with the last two mandatories being the champion himself via the WBO and Kubrat Pulev via the IBF.

Dubois’ lesser WBA title gives him the right to face Usyk in a so-called ‘WBA unification contest’. But this is all providing the Brit is able to return to the ring any time soon.

Fury called out by Haye over phoney Usyk promise

During the first knockdown, Triple D appeared to fall awkwardly on his leg, and it is expected that he has damaged the ligaments in his knee judging from the swelling post-fight.

Speaking about the injury, Dubois’ trainer Shane McGuigan said after the fight: “You can see on his leg, it’s really swollen, there was no strength there when he was throwing shots in the first round. His knee was buckling, we’re going to have to go and get a scan, but it’s sink or swim in these situations and he swam tonight.”

When asked about how long Dubois could be out of the ring for, McGuigan replied: “Normally a ligament takes a quite bit of time, but we’ve got a great medical team and we will assess the damage.”