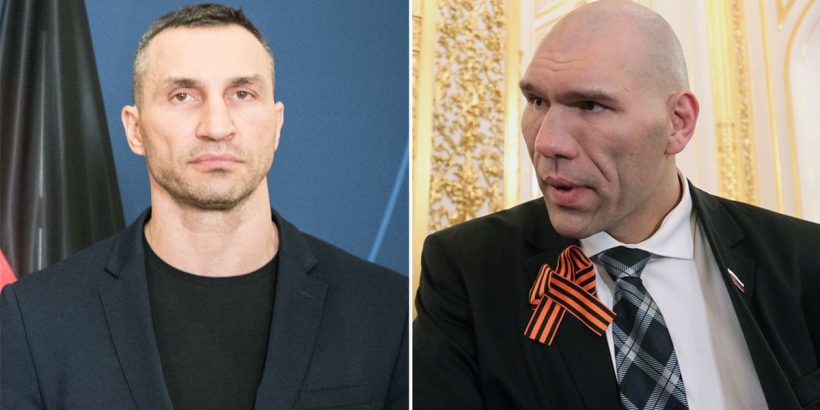 Heavyweight's Vitali Klitschko and Nikolai Valuev never faced off inside the ring but could now finally fight on the battlefield.

Klitschko retired from boxing in 2013 to turn his hand at politics and is now Mayor of Kyiv. Alongside brother Wladimir, he has joined Ukranian soldiers in fighting back against the invasion from Russia.

Valuev, who stands at a giant 7ft, also entered the world of politics after retiring from the sport and joined the United Russia party in 2011.

And he could now finally take on Klitschko on the battlefield after being called up by Vladimir Putin to fight on the frontline in Ukraine.

Valuev decided to hang up his gloves just three days after being infamously beaten by David Haye, as he struggled with long-term bone and joint problems.

But Klitschko, who was WBC world heavyweight champion at the time, tried to lure Valuev out of retirement with a lucrative offer. That deal was rejected by the Russian, who was later branded a "chicken" by the champion.

Speaking in 2010, Klitschko said: "I don’t want to speak bad about him, but I gave Valuev the biggest financial proposal of his career.

“There are two reasons why he’s done this. Firstly, he wanted to say no anyway. The second point is that he understands if the loses to me straight after losing his title, that’s it for him."

Valuev hit back though and said the offer that was tabled to him was unsatisfactory – and believes he was on a hiding to nothing if he accepted the Russia vs Ukraine boxing showdown.

Since retiring, Valuev has turned his attentions to proving the existence of the "Russian Yeti" and has spent more than a decade hunting Bigfoot.

His bid to find the creature even saw him appear on Channel 4 series 'Bigfoot Files' in 2013 as he hunted for the real sasquatch.