Two-time Olympian Caroline Buchanan will have scans on her reconstructed sternum this week in the hope of being cleared to jump back on to her bike and restart her Tokyo mission.

Buchanan is back in Canberra to continue her rehabilitation training 15 months after she almost died in an off-road accident, which crushed her sternum, collapsed her lungs and caused dangerous bleeding around her heart. 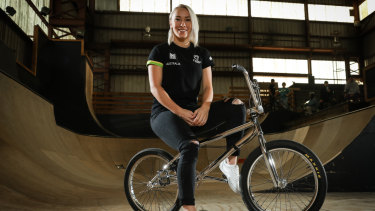 Caroline Buchanan hopes to be back on her bike by June.Credit:Con Chronis

The 28-year-old has had three operations to fix her sternum with plates and wires after ongoing complications, limiting her to just a handful of races since New Year's Eve two years ago.

The time off her bike has given her time to invest in other projects, including a children's book series and signing a partnership with Canberra company Rubik3 to fund her 'Next Gen' scholarship program.

But Buchanan, an eight-time BMX and mountain bike world champion, says her Olympic fire still burns and she's hopeful of being allowed to start training in the coming months.

"I'm ready for Tokyo and to continue that moment. The goal is, if the scans go well, to be back in the gym in four weeks and to be back on the bike at the start of June to prepare for an Olympic test event in Tokyo," Buchanan said.

"To have to sit back and build the fire and determination … this is the longest I've ever had off my bike. The first five months with two surgeries and now another three … six months later again.

"It's made me look at my career off the bike, but the fire to gear up towards Tokyo is still very strong.

"I'll have about a seven month qualifying window to step back in and get on the front line, hopefully get back to that podium level for the Olympics."

Buchanan has had three different titanium plates bolted into her chest to help her sternum heal. The last operation was a "last resort" option. If it didn't work, doctors may have needed to cut part of the bone, which would have left her lungs and heart vulnerable in bike crashes.

"I think the team I've got at the AIS with Julian Jones as my gym coach, we've got to change the pathway," Buchanan said.

"I'm used to being in the gym two times per week, now I'm going to be in there five times and rebuilding the machine. Getting back to that sprinter level.

"It's been challenging watching my muscles decrease and the girls on the world stage, but I've been watching them and studying as much as I can. 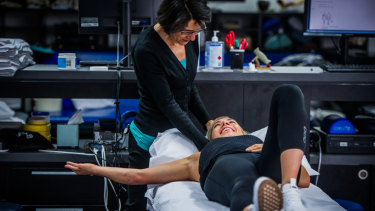 Caroline Buchanan has been doing rehabilitation work at the AIS.Credit:Karleen Minney

Buchanan hopes to race again at the Tokyo test event in October and four World Cup qualifying rounds at the start of next year.

But Buchanan has still been busy, even though she hasn't been flying down BMX tracks around the world.

She hopes she can help usher in a new generation with her partnership with Rubik3, increasing her scholarships from $3000 to $5000 as part of a three-year arrangement.

Two girls will have the chance to secure the scholarships, which are open for applications, to fund their BMX dreams on an international stage.

"[Surfing champion] Layne Beachley changed my career when I was 14 and that inspired me to start a scholarship," Buchanan said. 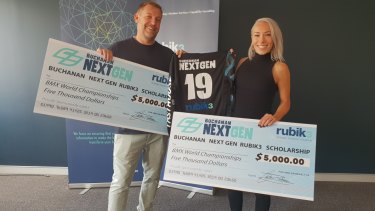 "To give them a chance to go international to have that belief in themselves they could be Olympians one day, too.

"For women in sport, you can't be what you can't see. So planting the seed for a future generation, it's humbling for me."

Buchanan sold her Olympic bike and world championship jersey to fund the scholarship program five years ago, but Rubik3 will now kick in $15,000 per year.

Rubik3 associate partner Nadia Pessarossi said: "When we heard about the Buchanan scholarship, following our community model this year of 'girls can too' … the values and everything connected beautifully. It was a no-brainer."