Caleb Ewan has finished second in the fourth stage of the Giro d'Italia after just failing to run down Richard Carapaz in a sprint for the line.

Carapaz attacked in the final few hundred metres and though Lotto-Soudal's Ewan set off after him, the Ecuadorian had just enough to hold on. 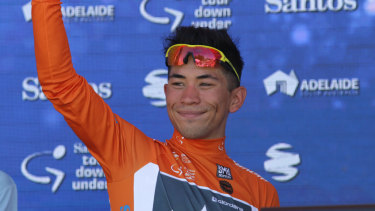 While it was the Movistar rider who took out the 235km ride from Orbetello to Frascati, Primoz Roglic was the big winner as a late crash hit his rivals, including Tom Dumoulin, and helped him extend his lead in the pink jersey.

A touch of wheels a little more than five kilometres from the finish saw several riders hit the deck and caused a shake-up of the general classifications.

There had been much speculation as to whether the slight uphill finish would suit a sprinter or a punchier rider but in the end only a small group was left to contest the stage, with Roglic and Carapaz the only major general classification hopefuls among them.

Englishman Simon Yates of the Australian Mitchelton-Scott team was in the next group on the road alongside Vincenzo Nibali (Bahrain-Merida), Miguel Angel Lopez (Astana) and Bob Jungels (Deceunick-QuickStep), conceding 16 seconds to Roglic.

However, the big loser was Dutchman Dumoulin.

The Team Sunweb rider, second in this race last year, already looks out of the reckoning as he crossed the line more than four minutes after Roglic, bleeding heavily from his left knee.

Roglic now leads by 35 seconds from Yates, with Nibali a further four seconds back.

The win could also bring Carapaz back into the reckoning after a disappointing opening time trial, with the bonus seconds leaving him 81 seconds off pink in 16th place.