Caleb Ewan misfired on stage one of the Tour Down Under where he lost position and placed seventh but has backed himself to chalk a win at the WorldTour season opener as the battle for sprint supremacy heats up. 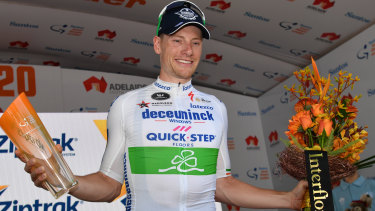 Ewan (Lotto Soudal) said he felt “pretty good” at the end of the flat, 150-kilometre run in Tanunda despite the result in what is his first race of the season after skipping the Bay Crits and national championships earlier this month in an effort to avoid fatigue.

“I sprinted from so far back by the time I got near the front I was finished. I’m confident in my form and as long as the team can get me to where I need to be, I think I can do well,” Ewan said.

Bennett signed with Deceuninck-Quick-Step in December following a protracted contract dispute in which he sought to be released from Bora-Hansgrohe, which overlooked him for the Giro d’Italia and Tour de France last year despite his steady rise to prominence.

The five-time Grand Tour stage winner was one of the most prolific sprinters of 2019 but didn’t get an opportunity to verify himself at the Tour de France where Ewan won three stages on debut in what for him was a year of quality-over-quantity victories.

Ewan rated Bennett among his top competition at the Tour Down Under and ahead of a season where a new generation of evenly-matched fast-men will try to stake their claim as No.1.

“He’s definitely one the best riders in the world,” Ewan said.

“We’re here with a few very good sprinters. I’d say [Elia] Viviani and Bennett are two of the best so to beat them is always going to be difficult and you don’t have any room for errors. In a finish like today there is no chance you can beat them but I’m confident with my form, I’m confident with my speed and I know if I’m around them when I start my sprint then I can beat them.”

The win for Bennett was a relief in what was his first race as the marquee sprinter of Deceuninck-Quick-Step, which has housed the likes of Mark Cavendish, Marcel Kittel, Fernando Gaviria and Viviani, who Bennett effectively replaced.

The Belgian outfit timed its run to the finish well, moving up with about 10km to go before driving at the front with around 2km remaining. New Zealander Shane Archbold, who Bennett brought with him to the team, led the peloton into the last kilometre.

“I did feel the pressure today and it’s really nice to get it [the win] early,” Bennett beamed.

“The only mistake made today was by myself, I left it too late because the guys got the jump on me and I found it hard to get the wheel back in front. Everybody did a fantastic job today and the lead-out was perfect.

“Shane did a monster effort, went super long and it made it perfect for [Michael] Morkov as well to wind it up because Morkov could be more explosive with his effort.

“I think the team has more confidence in me than I do in myself.”