Australians for a long time have followed the exploits of Richie Porte and Cadel Evans at the Tour de France, but a fresh face will lead the charge for the nation this year. 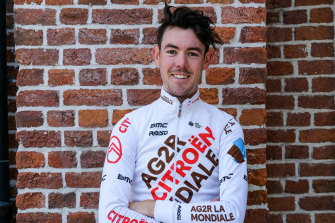 The new GC guy: Ben O’Connor is leading the charge for Australia at the Tour de France this year.

The breakthrough performance earned O’Connor a three-year contract extension with French team AG2R-Citroen and is something he wants to improve on when the 109th edition of the Tour starts in Denmark on Friday night (AEST), aiming to join predecessors Porte and Evans as the only Australians to have finished the merciless three-week race on the podium.

The 26-year-old knows he will have to adjust his strategy given he is now a marked man, however his newfound familiarity with not only the Tour, which Porte describes as unparalleled stress, but also the team he was new to last year stands to be advantageous.

“No one will take away that you’ve finished fourth. It’s still a massive result and if that’s as good as it gets, I’ll still be a very proud man,” O’Connor told The Age and The Sydney Morning Herald.

“You see, it’s difficult to do it again and again and again. It’s only very, very particular people, very special people, that can perform every single year in the Tour, and also get through all the bad luck and the crashes and disastrous stuff that goes on.” 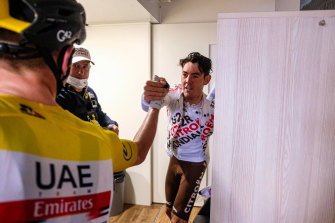 O’Connor is one of only four Australians to have finished the Tour in the top five since its inception in 1903. Just two riders – Pogacar and four-time champion Chris Froome – have officially won back-to-back titles since Miguel Indurain claimed his fifth consecutive yellow jersey in 1995. Drug cheat Lance Armstrong was stripped of his seven straight victories from 1999-2005.

O’Connor will enter this year’s edition on the back of the Criterium du Dauphine, where he finished third behind Jumbo-Visma teammates Primoz Roglic and Vingegaard. The Dauphine is a litmus test for the Tour and showed O’Connor is on par with the key contenders who will fight for the yellow jersey from July 1-24.

“I think that last year if I hadn’t had such a bad crash on the first day I still would have been there with the top guys. I strongly, strongly believe that,” O’Connor said.

“I definitely know I can be better than what I am, but still always improving from what it was last year also, so I have zero complaints.”

The success of his contemporary Jai Hindley, who beat Carapaz to become the first Australian to win the Giro d’Italia in May, has also boosted the Perth climber’s confidence even though the Tour is “a million times more stressful”.

“Last year, clearly Tadej, Vingegaard and Carapaz were above us on a level but watching Carapaz get blown by Jai there on that [second-last] day [at the Giro] was really cool to see.

“I reckon it’s possible. Whether it happens or not, no idea.” 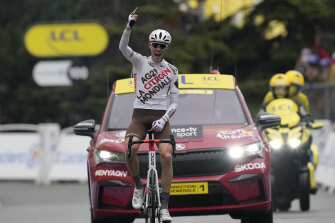 Central to any Tour campaign is the strength of one’s team and while AG2R-Citroen will not define success with a number, O’Connor has faith that the squad enlisted to support him, this time as an outright leader, has also made gains on last year. That’s important considering the 3349.8-kilometre route, which includes two time trials, notorious mountain passes, plus a stage incorporating cobblestone sectors that present a danger to title contenders typically unaccustomed to racing over the jarring, uneven surfaces.

“It’s a well-rounded team where you’re not just in a bit of a clique,” O’Connor said.

“You’ve got a great mix of guys who have done it all on the cobbles before, and won classics, to then guys like Aurelien [Paret-Peintre] and Geoffrey [Bouchard] that can climb really well.

“Geoffrey has won the KOM jersey in the Vuelta and Giro so on his day he can be super helpful.

“It will be cool to have guys like that whilst last year I don’t think we were good enough on the climbs really, looking at it in reflection that is.”

Added to that, among others, is Oliver Naesan, who last season proved a great support on and off the bike, helping O’Connor, a latecomer to the sport, stay focused and reassured when the inescapable noise of the Tour got louder, and the stakes higher than anticipated.

“You try not to do things solo, you just wait, and you look for them, and that’s your one objective for the day,” O’Connor said of his teammates. “My objective for the stage to Carcassonne is just to follow Oli all day and that’s it, rather than saying, OK, you have to make the front echelon. If you follow Oli, I will be in the front echelon. That’s the better way to do it, for me.”

O’Connor has been working on his time trialling and has an eye on stage 17 to Peyragudes, which suits him.

Pogacar, 23, remains the man to beat and even Evans, Australia’s only Tour winner, is flummoxed about how to beat the Slovenian prodigy, who despite his age has a subtle yet unmistakable command over the peloton. 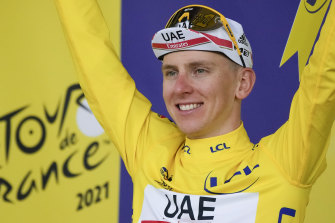 Unstoppable? Tadej Pogacar is again the man to beat at the Tour de France this year. Credit:AP

“You’d have to put all the weight and pressure on him and try and follow. What could you do? Every year they’ve [UAE Team Emirates] reinforced their team and been solider and solider. The onus is going to fall more and more on them,” Evans said.

Jack Haig (Bahrain Victorious) is another Australian climber aiming to make his mark. It’s anticipated the likes of O’Connor, Hindley and Haig will fly the flag as Australia’s new grand tour title contenders for a while. Pundits believe that the nation’s strict border measures in response to the COVID-19 pandemic, which blocked teams from travelling abroad to compete, has delayed the progression of the next generation.

“They haven’t had any exposure to international competition or even competition because of the lockdowns so unfortunately, I think we’re going to have a lull,” Evans said.

Ewan is one of the world’s fastest sprinters but will be looking for redemption, having crashed out of the Tour on stage three last year and following a lacklustre Giro campaign in which he also hit the tarmac heavily before later abandoning.

Matthews headlines BikeExchange-Jayco alongside Dutchman Dylan Groenewegen, who is one of Ewan’s primary rivals.