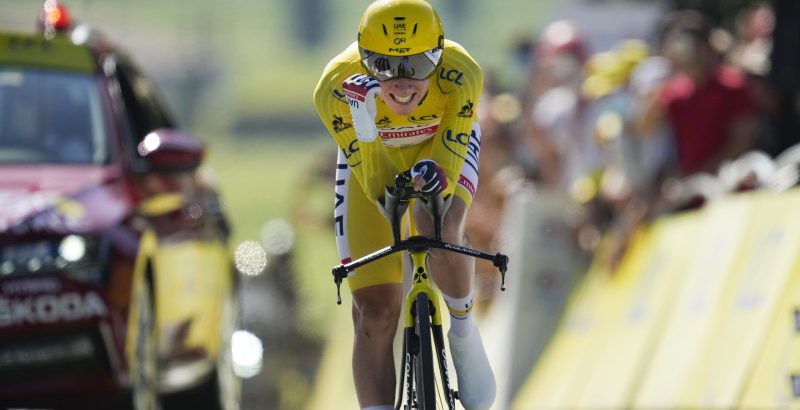 Tadej Pogacar was poised to win a second consecutive Tour de France title as the Slovenian retained his overall lead following the final time trial, a 30.8-km solo effort from Libourne on Saturday.

Danes Kasper Asgreen and Jonas Vingegaard were second and third respectively in the 20th stage, 21 and 32 seconds off the pace. 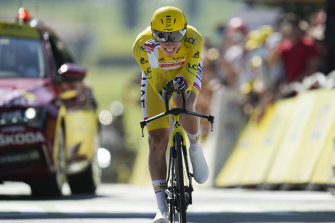 Slovenia’s Tadej Pogacar, wearing the overall leader’s yellow jersey, celebrates as he crosses the finish line of the twentieth stage of the Tour de France.Credit:

Overall, Pogacar leads Vingegaard by five minutes 20 seconds and Ecuador’s Richard Carapaz by 7:03 ahead of Sunday’s final stage, a largely processional ride from Chatou to the Champs Elysees in Paris.

The UAE Emirates rider bettered his rivals in the opening time trials and in the mountain stages, claiming a total of three stage wins in a dominant performance.

It came in sharp contrast with last year, when Pogacar snatched the overall lead in the final time trial only as his fellow Slovenian Primoz Roglic cracked in the uphill drag to La Planche des Belles Filles.

This time, Pogacar was the favourite and he duly delivered, even though he benefited from his main rival’s failure with Roglic pulling out ahead of the eighth stage following a crash earlier in the race.

Just like last year, Pogacar is set to win the white jersey for the best Under-25 rider and also the polka-dot jersey for the mountains classification.

Pogacar will become the youngest double winner of the race.