London: Richie Porte believes his chances of winning a medal at the Tokyo Olympics hinge on how he recovers from the gruelling, three-week Tour de France that finished only last Sunday.

The 36-year-old headlines the four-man Australian team, including Lucas Hamilton, Luke Durbridge and Rohan Dennis, which will compete in the men’s road race on Saturday.

Porte has had just five days to recover from the Tour ahead of the mountainous 234-kilometre Olympic test that will take in the lower slopes of Mt Fuji.

The Tasmanian will also compete in the men’s time trial alongside former world champion Dennis on Wednesday. He said his selection for the time trial was a “long story”.

Asked at the Tour if he was keeping some in the reserve for Tokyo, Porte said supporting Ineos Grenadiers teammate Richard Carapaz, who finished third on the general classification, rather than racing for the yellow jersey himself was beneficial.

“I’m motivated for Tokyo. It was nice to be here [in France] not absolutely killing myself every day for GC [general classification] but I’m looking forward to the Tokyo road race and time trial. At the same time, six weeks away from my wife and two children, it’s a tough gig,” Porte told The Age and the Herald. 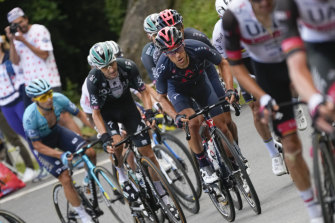 Australia’s Richie Porte (centre) in the thick of the action during this year’s Tour de France.Credit:AP

“I think obviously coming out of this [the Tour], see how I am. It’s more about recovery than anything else. The road race is a bit of a lottery.”

Porte isn’t the only rider making the tight Tour-to-Tokyo turnaround.

Durbridge will make his Olympic debut after supporting BikeExchange teammates Michael Matthews, who finished second to Mark Cavendish on the points classification, and co-leader Hamilton, until he crashed out on stage 13, at cycling’s biggest event.

Durbridge has made a concerted effort over the last Olympic cycle to be selected for Tokyo and represent his country at an event he estimates he’s been a reserve for three times.

The 30-year-old initially focused on time trial selection, which he missed out on. However, following the withdrawals of Jack Haig, who suffered from a heavy crash at the Tour, and Cameron Meyer, whose father is ill with cancer, Durbridge made the cut for the road race.

“It’s a really big dream. I’m really excited. It’s something I’ve been working towards for a very long time,” Durbridge told The Age and the Herald.

“Jack Haig and Cam, my thoughts go to them and recovery for them. But you’ve got to be in it to win and you’ve got to be there. I’m glad that I can be there and fill in that spot with great honour.

“The hard thing with the Olympics is the number of spots that we get; track take one and mountain bike, road cycling and BMX, they’re all combined, so we get a very limited amount of spots,” Durbridge continued. 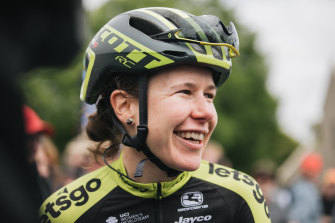 “I knew they’d take leaders but not necessarily workers. I kept my hand firmly in the air, saying, ‘Look, I’m here and I’m ready.’”

Durbridge has forged a career as a reliable workhorse and road captain with his BikeExchange trade team. He knows from experience that the strength of a team’s supporting cast is as important as the form of the individual leaders vying for victories.

“You need those guys [support riders]. You don’t get the results without them. A strong team makes a strong leader.

“It’s something I’m quite good at: big team player. I grew up playing team sports and I really enjoyed that. You’ve got to think what’s best for your leader, get to know them personally and how they work in the bunch; Do they like to ride back in the peloton, or do they like to ride safely at the front? What they like to eat and drink, all this sort of stuff.

“I like pushing myself to the limit and a plan coming together,” the former national time trial champion continued.

“I love the process of it, the intricacies of starting from 250km back and how you’re going to get there … studying the course, knowing which corner is going to [be windy], which is not, what you need nutrition [wise].

“That’s why I find it rewarding is because it is a team sport, but it is also very individual in that aspect as well. I like the mix of it. It’s a beautiful sport.”

Amanda Spratt, 33, headlines the Australian team that also includes Grace Brown, who has had a winning season but crashed out of the Giro Donne earlier this month, as well as Tiffany Cromwell and Sarah Gigante.

“We’ve got a great road captain in Tiffany Cromwell. We’ve seen what Grace has been doing over in Europe and that youth of Sarah Gigante. We’ve got a strong and well-rounded team that will really suit this course,” said Spratt.