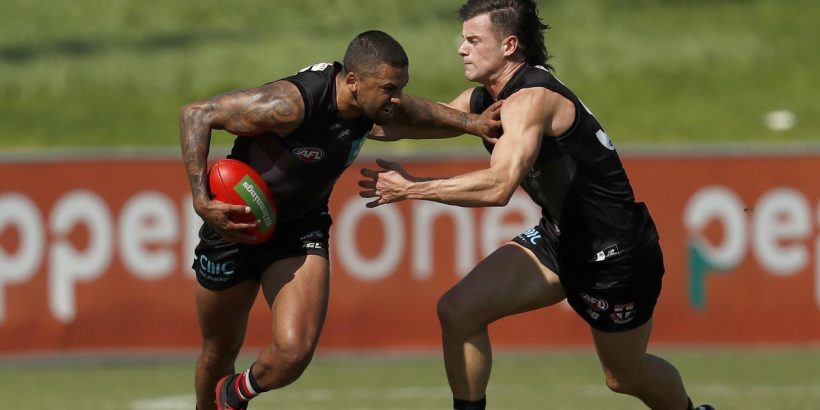 Tough times at St Kilda have been made tougher with injury setbacks for Dan Hannebery and Jarryn Geary but ruckman Rowan Marshall is back to tackle West Coast on Saturday.

Hannebery, who has only played 13 games since joining the Saints at the end of 2018, strained a calf on Tuesday and is sidelined for another four weeks,

Geary, on the recovery from a broken leg in the pre-season, was sent for surgery on a bone spur in his foot and will be out for at least another six weeks.

The injuries issues have compounded both a tough week for coach Brett Ratten after last week’s capitulation to Essendon and with clashes against the Eagles, Richmond and Port to come.

Added to that is the poor form of big-money recruit Bradley Hill, who Ratten was adamant would “simplify” things this week and return to his best, much like his teammates after the coach spent two days analysing what went wrong against the Bombers.

“Sometimes you move on quickly and sometimes you sit down and talk about it and go through it. We’ve gone through it over a couple of days,” Ratten said on Thursday.

“Not trying to revisit it too much, but the game starts with contest and effort and if you can’t give that … a sexy game plan is secondary. The game is about winning the ball or putting pressure on the man and we didn‘t do either.

Ratten said Hill, who is believed to be earning more than $800,000 a year at Moorabbin and had one contested possession from his 16 disposals against the Bombers, would find a way to lift.

“Maybe the scrutiny is a little bit hard from last week. There were a lot of players down and he probably had the worst kicking game of his career against Melbourne (the previous week),” he said.

“He’s a player we need to perform well and he can.

“You can try and concentrate on a lot of things in your game, but focusing on one or two points which make you a good player and us a good team .. sometimes simplifying the game is best for everybody and I think he’ll do that this week and respond.”

Dan Hannebery is out for another month with a calf strain (Photo by Darrian Traynor/Getty Images)Source:Getty Images

Ruckman Marshall will play his first game for 2021 after missing the opening three matches with a hotspot in his foot.

“He’s been itching and been asking multiple times ‘can I play, can I play?’,” Ratten said.

“I’ve just been saying ‘hold your horses, big fella’, we’ve got to get you right, but he’s ready to go which is great.”

Fellow ruckman Paddy Ryder is at last three weeks away from playing having returned to the club fore peroneal leave this week.

“He’s got to do a little bit more work, but the good part is he came in with a big smile,” Ratten said.

“That was the real pleasing part for us, to see a happy Paddy and him being back at the footy club.

“To do the things that he had to do at home, he seems in a really good spot and we’ll have to monitor his workload and get him to a point where he’s ready to play.”

Ratten said it was “frustrating” to see players like Hannebery, who was one week off a VFL return, continually have injury setbacks.