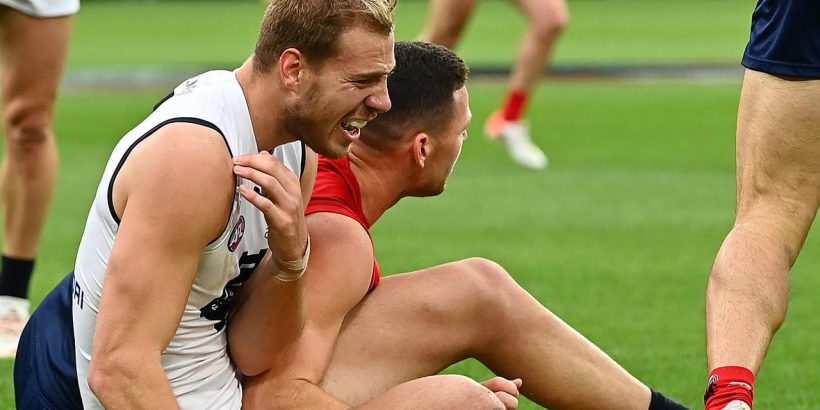 Carlton coach David Teague has revealed key forward Harry McKay has been playing through a shoulder injury for at least the past fortnight.

McKay came from the ground early in the first quarter after suffering a knock to his right shoulder in the Blues’ 26-point loss to Melbourne on Sunday.

The Coleman medal favourite went down to the rooms but re-emerged late in the first term and bravely played out the game.

McKay looked ginger and struggled to compete one-on-one against Steven May but came to life in the third quarter with two of his three goals.

Teague said McKay had been battling the shoulder issue for the past few weeks.

“He’s had that for a couple of weeks so hopefully it will continue to get better,” Teague said after the game.

“He said he felt better going into this game than last week so hopefully it will get better again.”

McKay is six goals clear at the top of the Coleman Medal count. (Photo by Quinn Rooney/Getty Images)Source:Getty Images

In a double blow for the Blues, David Cuningham looks set for an extended stint on the sidelines after going down in the opening minutes with a knee injury. Cuningham will be assessed to determine if he suffered an ACL injury.

Teague didn’t shed too much light on the extent of the damage after the game but said it was a “serious knee injury”.

“We’ll find out (on Monday) exactly what it is but, yeah, it’s really disappointing,” he said.

Meanwhile, star midfielder Patrick Cripps shrugged off any concerns about the seriousness of his back injury to rack up 27 touches and seven clearances.

Reports surfaced during the week that Cripps was playing through a fractured back, but the concerns were quickly dismissed by Teague and the Blues as a prior back injury that had fully healed.

Teague said that Cripps’ performance on Sunday was far “better than the way (he) handled the media conference” during the week.

“It was probably one of my worst press conferences,” he said.

“I thought the injury was in the past, it hampered him in rounds two and three so when it got brought up I was probably a bit frustrated, and wasn’t as honest and direct as I could have been.

“I knew the full extent (of the injury). The message I wanted to get across is he’s fine now and I probably could have been clearer.

“I thought his game was good, he had about 10 tackles, tough inside, competed hard, he’s been a great player for us for a long time and today he was tough again and put his head over the ball.”

Teague said Sunday’s loss to the undefeated Demons was one of their more disappointing games for the year as they hadn’t played as well as some of their other similar losses.