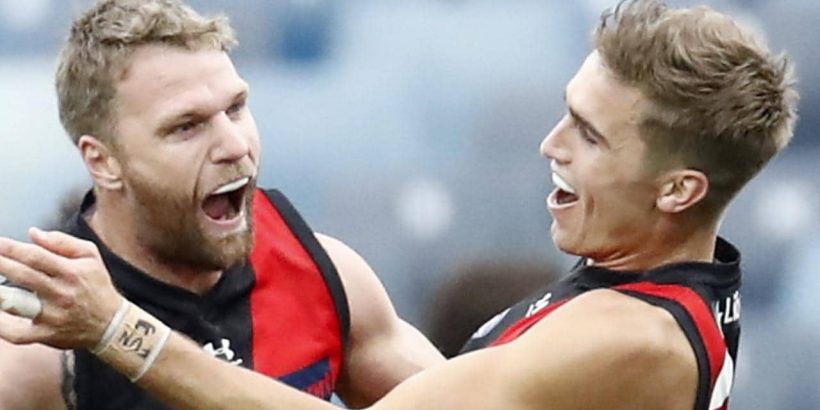 The Jake Stringer-inspired Essendon Bombers remain alive and kicking for a top eight berth after blowing the Gold Coast off a windswept GMHBA Stadium with a 68-point victory on Sunday.

Stringer monstered the Suns in the middle of the ground and then terrorised them when he went forward in an imperious best-on-ground performance to lift the Bombers temporarily into the top eight with their fourth win from the past six outings.

To stay there at the end of Round 23 and play finals, the Bombers need to beat Collingwood next weekend and hope other results go their way.

With Stringer playing some of the best football of his career, the Bombers will not die wondering.

Stringer was the dominant figure on the ground in the first half with three goals, 10 disposals, six contested possessions, four clearances, three inside 50 entries and two marks to his name.

By the time the full-time siren sounded, he had five goals, 19 disposals, 12 contested possessions, four clearances, five inside 50 entries, five marks and a goal assist.

Four unanswered goals in the third quarter handed the Bombers a commanding 60-point lead at the last change as the Suns went goalless with their brief period of competitiveness in the first term a distant memory.

The Gold Coast Suns were simply woeful. The effort from the win over Carlton last week was missing as they returned to the rubbish they served up against Melbourne a fortnight ago.

It was all Essendon in the second term as they kicked the first five goals of the quarter on the way to a 34-point buffer at halftime.

The ball use from the Bombers was much sharper with more handball as they ran into the wind. Stringer and Matt Guelfi kicked two goals apiece for the quarter while Alec Waterman and Sam Durham chimed in for the rampant Essendon.

The only resistance from the Suns came through a goal to Brayden Fiorini as the they were unable to handle the considerable lift in intensity from Essendon.

The teams were locked at 14-all at quarter-time after a scrappy opening term when the Bombers had the stiff breeze at their backs.

The Suns got numbers back in defence to stifle Essendon’s attacking thrusts that were also hampered by Essendon kicking it too long, too often.

The Bombers kicked the first two goals of the match through Stringer and Archie Perkins but the Gold Coast wrestled back the momentum, hit some targets and got their noses in front via goals to Joel Jeffrey and Josh Corbett.

If Fremantle beats West Coast, the Bombers will finish the round in the top eight. (Photo by Robert Cianflone/Getty Images)Source:Getty Images

Some of the teams already ensconced in the top eight will be hoping that results do not go the way of the Bombers over the next week or so. At its best, Essendon plays a brand of football that would worry any side – just ask the Bulldogs. The fearlessness of youth and the confidence that comes with genuine momentum combined with a quality midfield and a true matchwinner like Jake Stringer would make the Bombers a tricky side to play in September.

Sometimes you just have to play smarter, not harder. Essendon was guilty of butchering the ball in the first term when it bombed it long and expected the wind to do the work. But the Bombers switched their gamestyle to more run-and-carry with plenty of handball in the second term, which left the Suns backline all at sea. Some of the passages of play resembled a training drill with the Gold Coast defenders glorified traffic cones.

Touk Miller was once again one of the best in a beaten Gold Coast side. (Photo by Robert Cianflone/Getty Images)Source:Getty Images

Touk Miller accumulated 30 disposals or more for the 15th-straight match. It has been a wonderful individual campaign for the midfielder who must be rewarded with All-Australian honours. What Stuart Dew would give for more players with his work ethic, courage and skill level. On many levels, it has been another disappointing season from the Suns but Miller has been a shining light. The gap between the Gold Coast’s best and worst football is still far too wide with too many quarters when they go completely missing.

Round 23 will be like finals come early with a majority of games having a say in who makes the top eight or where teams will finish inside the top eight. The top four play each other – Geelong v Melbourne and Bulldogs v Port – while Brisbane’s clash with West Coast could decide if the Lions earn the double chance. The Giants and Bombers will also be fighting for their lives when they take on Carlton and Collingwood respectively.

PLAYER OF THE YEAR