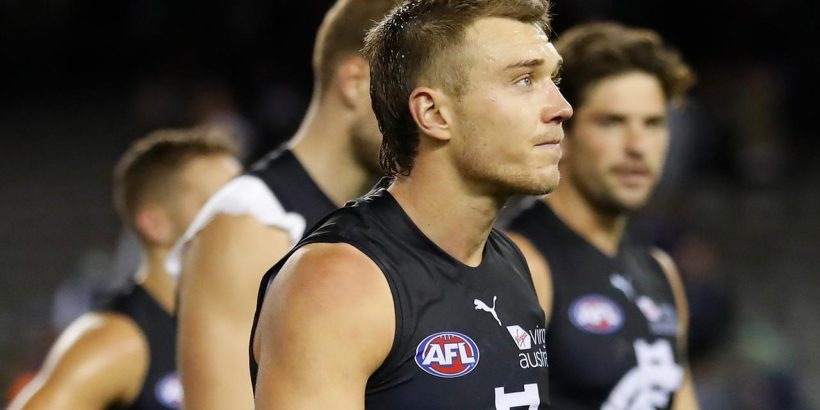 Carlton coach David Teague says his captain Patrick Cripps is “fine” and denied suggestions he has been playing this season with a fracture in his back.

Reports surfaced on Thursday suggesting Cripps, who has been below his best in recent weeks, has needed weekly injections to help him play.

Cripps suffered a heavy knock in a pre-season game that left him with a “sore back” according to Teague.

But Cripps has played every game this season and

Teague said he was “confused” why there was so much talk about his captain.

“He doesn’t have a fractured back. He had a sore back at the start of the year, I’m not sure what the actual findings were. But he’s been completing full training since Round 3, it’s not an issue now, everything is healed.”

Teague said he “wasn’t aware” of Cripps needing injections to play and was happy with how the club managed the issue.

“I don’t know what the medical side of things were,” he said.

“He had a sore back, we managed it from a training point of view, he’s fine now.

“It was more the first two rounds that it hindered his training, then we had about a 12 day break and he trained that week and since then he’s felt comfortable.

“The story right now should be is Cripps fine to play ? Yes he is.

“He’s completing all training, he’s playing strong and that’s what we want.”

Carlton said Patrick Cripps had been playing with "some soreness" on March 29.

It appears that was underselling it a fair bit.

Cripps‘ injury was thought to be similar to that of Brownlow medallist Lachie Neale, who played on with the issue before suffering an ankle injury which required surgery.

Teague came under fire this week for starting Cripps on the bench in the second-half of his team’s clash with the Western Bulldogs, which they lost despite leading by 27-points in the third quarter.

But Teague said Cripps wasn’t being managed in games because of the injury.

“He’s said “when I am right to play, if I put my hand up to play then you judge me like any other player”,” he said.

“That’s what leaders do. Crippa is in great shape right now.

“I’m getting a little bit confused why all the conversation is still happening now. It was a long time ago.”