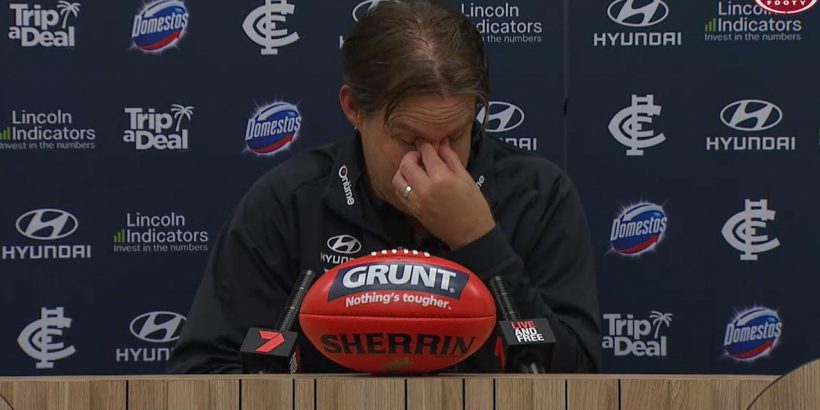 Carlton coach David Teague has admitted he gave “one of my worst press conferences” after being exposed omitting the truth about star Patrick Cripps’ injury.

Teague on Sunday fessed up about his response to a report Cripps was playing with a fractured back.

The Blues coach on Thursday denied the report just hours after it first emerged Cripps was still managing the injury with regular pain-killing injections.

The 40-year-old mentor said simply Cripps had a back injury at the start of the season which had since healed.

He was forced to backflip on his public statement following his team’s loss to the Demons on Sunday, which plunged the club to a 3-6 record, leaving their season hanging by a thread.

Cripps returned to form with a strong performance against Melbourne with 27 disposals, but the post-game interest was in Teague’s previous comments.

He said Cripps’ performance was “better than the way I handled the media conference (on Thursday)”.

“Thought it was one of my worst press conferences,” Teague said.

“That was pretty average by me. I thought the injury was in the past. It hampered him in Rounds 2 and 3, so when it got brought up I was probably a bit frustrated. I probably wasn’t as honest and direct as I probably could’ve been.

“At the end of the day, the message I wanted to get across was he’s fine now. I probably could’ve been clearer with the messaging around that.”

It comes after a report Teague was caught out by his own club when the team’s media department contacted The Sunday Footy Show to admit that Cripps had suffered a back fracture.

David Teague has just a few weeks to save Carlton’s season.Source:Getty Images

It left Teague needing to explain himself after the game.

“For me, the fans need to know he’s right, he’s out there. Last week he didn’t have a great game and then today we saw him turn up and compete and play strong and lead from the front,” he said.

“I knew the full extent (of the injury), I just thought it was in the past. To be honest, at the start of the year I probably didn’t share it all because there are times when you want to protect your player. This one, the frustration probably came off it was in the past and we were dragging up old news.

“Our medical staff, I have absolute trust in them. I think they do a very good job. But do they feed that information back to me? Absolutely. I‘m clear about what’s going on. I even did anatomy at university, so I’d like to think I know a little bit more than most.

“They do a great job and we‘ll always put the best interests of our players at heart. That’s something that I think this club really prides itself on. You can see that with Charlie Curnow, we’re not going to rush him back.”

Carlton plays Hawthorn in a must-win game at the MCG on Saturday.