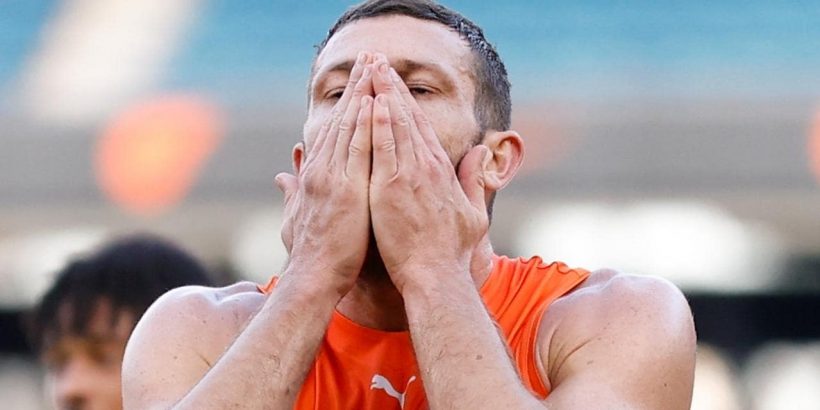 Giants coach Leon Cameron has rued his team’s inability to perform consistently across four quarters, and said the gulf between the Giants’ best and worst was keeping them outside of the top eight.

GWS kicked the first four goals of the match on Sunday but looked lethargic thereafter, as the hungrier Hawks stormed home with an 18-point win.

Cameron lamented that his side is “not good enough” to be in the eight as it stands, and things will only get harder with clashes against Melbourne, Essendon and Sydney scheduled for the next month.

“Our best and our worst, there’s too much of a gap,” Cameron said.

“You’ve got to find different ways to get yourself up when things aren’t going as well as you want them to. They outworked us today.”

The Giants coach said the opportunity to rise into the top eight was not a talking point leading into the match, and that his side were simply not deserving of finals contention.

“We’ve sat outside the eight for most of the year, and we’re a side that’s working our way through challenges with new players coming into our team and working through a young backline.

“We haven’t sat there and discussed, ‘look, you win this game you get into the eight’, the eight will be the eight.

“If you get there, you get there (and) you deserve to play (finals). Right now, with our gap still being a little bit too big with our best and our worst, we sit outside the eight for a reason.

Greater Western Sydney expects to regain a trio of key names for its crunch clash with Melbourne after a disappointing showing against Hawthorn on Sunday.

Coach Leon Cameron indicated Jesse Hogan, Shane Mumford and Sam Taylor could all be available for selection, after his side surrendered an early 23-point lead to the 17th-placed Hawks.

Cameron suggested it would result in a number of changes ahead of the Demons clash on Saturday afternoon.

“That’s a positive, because there’s numbers there and puts players, in terms of their spot, in the spotlight,” Cameron said.

“You want that competitiveness amongst your group.”

Captain Stephen Coniglio, however, is likely to remain out of AFL action for the next two-to-three weeks, but could return through the VFL as soon as next week.

“He might play some footy, but he won’t play at the top level,” Cameron said.

“He probably needs a run or two just to get his footy fitness up, but we’ll weigh up whether he needs another week or two at training or whether he’ll play at the lower level.”

Wingard is looking at a stint on the sidelines. (Photo by Daniel Pockett/Getty Images)Source:Getty Images

Chad Wingard will be sent for scans during the week to determine the extent of the hamstring injury he sustained in the Hawks’ stirring win over the Giants on Sunday.

Wingard was pulled from the field at three-quarter time with hamstring tightness and replaced by veteran Shaun Burgoyne, who was the medical sub in his 399th game.

Alastair Clarkson was confident post-match that Wingard would not be sidelined for an extended period, and suggested subbing the 27-year-old out of the game was a precautionary measure.

“We don’t think it was a serious soft-tissue injury, but having said that we’ll get scans there,” Clarkson said.

“He came off the field and we just didn’t want to take a risk. We knew that we had Shaun Burgoyne there as the sub, so we activated him right on three-quarter time.”

Wingard appears unlikely to face his old club, Port Adelaide, on Saturday night, and will be joined on the sidelines by Denver Grainger-Barras, who was taken off the field after teammates noticed the first-gamer’s concussion-like symptoms.

“It was one of our teammates that alerted the docs that perhaps Denver wasn’t quite right, so he’s a concussion protocol, which will unfortunately mean he won’t be able to back up his first game next week,” Clarkson said.

It is unclear when Grainger-Barras suffered the concussion.

“Early in the game, when we needed some inspiration, it was young Grainger-Barras in his first game, who competed in a couple of really important contests for us,” Clarkson said.

“Just his aggression on the footy, he took a mark, and I don’t know why it wasn’t paid a mark — there must’ve been a free kick somewhere — the excitement for our fans but also the disappointment when the free kick was paid against, it was such a tremendous mark.

“He and Will Day, perhaps our two youngest players, their commitment to the contest was outstanding, and that’s an inspiration for the older guys.”

Hawthorn’s return from the bye has delivered two wins from three games, in an impressive turnaround from a win-loss ledger that read 2-9 after round 11.

“We were really disappointed with our first half of the year,” Clarkson said.

“We just didn’t play anywhere near the footy that we thought we were capable of playing.

“We had a correction at the halfway mark, and thus far we’ve played three really competitive games of footy.”

Clarkson contributed pressure on the opposition and improved levels of composure as the main catalysts for the Hawks’ return to form.

“We needed to fix some things up with all areas of the game, but the most significant part was our pressure around the ball and stopping opposition from being able to move the ball so fluently.

“We needed to be a little bit smarter with our ball use so that we weren’t so bold and attacking with the ball, strangely enough. If you go too quick, sometimes you just can’t defend it on the rebound.”