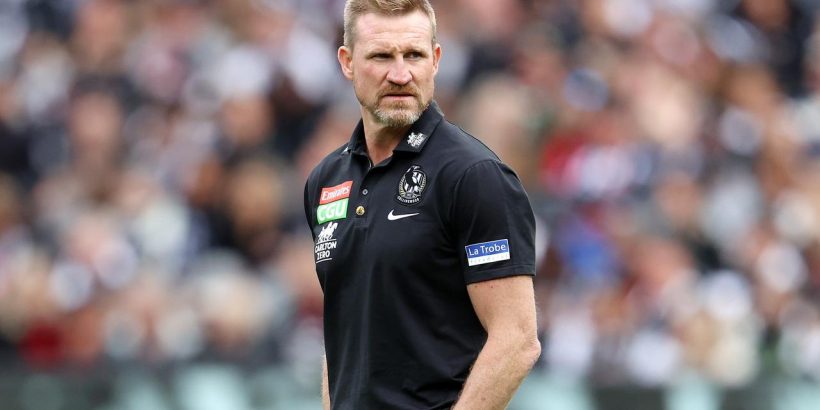 Collingwood coach Nathan Buckley is reportedly preparing to step down as coach of the Magpies.

As first revealed by The Age, Buckley is expected to inform the players and football department of his decision later today.

The 48-year-old has served as Collingwood coach since succeeding Mick Malthouse in 2012, with the Magpies winning 217 games under his guidance.

Buckley is out of contract at the end of the season, but The Herald Sun reported this weekend’s Queen’s Birthday clash at the SCG against Melbourne would be his last game as Collingwood coach.

Magpies assistant Robert Harvey is the most likely candidate to take over the reins, while Brenton Sanderson, Hayden Skipworth and Damian Carroll are also in contention.

Buckley has been under immense pressure following Collingwood’s disappointing start to the season — the Magpies are 16th on the AFL ladder with three wins in the opening 12 rounds.

Collingwood is holding a media conference at 11am AEST.

Nathan Buckley was my sporting hero as a kid. This is going to lead to plenty of trolling from Brisbane fans but to me it’s really sad that he never got that premiership as a Collingwood player or head coach. He was 🤏 this close 3 times. I hope he gets it somewhere else. #AFL

Buckley stepping down is the ultimate way of ensuring that State of Origin gets pushed to one side today. #AFL

Radio presenter Gerard Whateley said he felt “quite emotional” after being informed of the bombshell report.

“I think Buckley’s presence in the game, his standing not just at Collingwood but more broadly, of course he’s the figure of debate and consternation at various stages, but for what he has achieved in the game, for what he did on the field and for what he’s done over a long period of time, coaching for a decade, the longevity in that,” Whateley told SEN.

“The fact that everyone gave up on him and couldn’t see what he would become as a coach and then in the aftermath of that he took the team to a Grand Final in what was a stirring run and then they botched the Preliminary Final run the following year.

“The Elimination Final win last year was one of the great finals wins by any team in the circumstances.

“Then to live through things as they fell apart in the off-season and it was foreseeable that Collingwood would have the start to the season that it had and casting an eye towards the long-term where the president said last week the next time they would contend is 2024 or 2025.

“Would a coach of 10 years be able to see out that period? The answer was likely no.

“I always thought Collingwood would never sack Nathan Buckley, they wouldn’t have to. He would understand that his time had come and that everyone has their time.”

Nathan Buckley has served as Collingwood coach since 2012.Source:Getty Images

Buckley led Collingwood to a grand final in 2018, where the Magpies lost a thriller against West Coast.

That same season, he was named AFLCA Coach of the Year.

Buckley’s exit comes after Eddie McGuire stepped down as Collingwood President in February, while football manager Geoff Walsh and list manager Ned Guy have also departed the club since the end of the 2020 season.