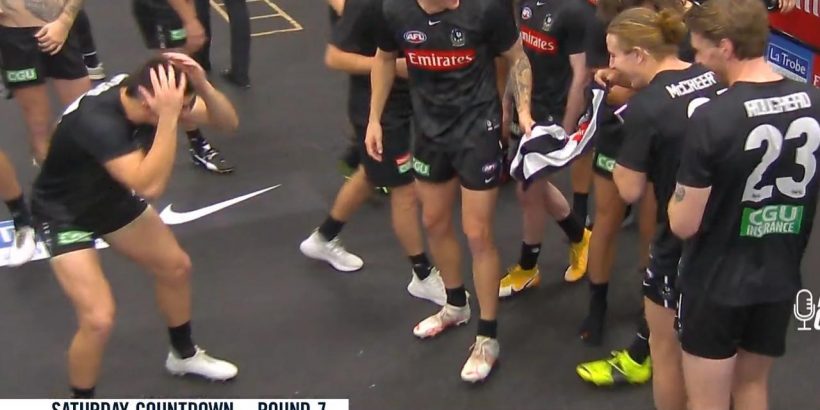 That’s not the way to start your AFL debut.

Collingwood teenager Caleb Poulter was treading on glass less than an hour before the Magpies’ clash with Gold Coast at the MCG when his priceless, framed debutant memorabilia was smashed by over-excited teammates.

Poulter and his framed poster were the victims of Collingwood players rushing in and jumping on him after Jack Crisp had presented him with the keepsake and his first match-day guernsey before the club’s final warm up.

Seconds later, there was glass all over the floor in the dressing room. Star forward Darcy Moore walked right over the top of the shards on the ground.

“Oh no. Careful with your hands there young Poulter,” Fox Footy’s Dermott Brereton said with a laugh.

Caleb Poulter is already a cult hero at Collingwood.Source:Getty Images

“And your feet. Darcy Moore, he can walk on water, walk on glass. That’s a mirror, that’s seven years bad luck.”

David King told Fox League: He’s smashed it. We just hope that’s not a sign of things to come.”

Caleb Poulter presented with his debut jumper … hopefully what happened next isn't a bad omen for @CollingwoodFC! 😅🧹#AFLPiesSunspic.twitter.com/Z8KNz8arj4

It didn’t take the beaming smile off Poulter’s face, and he got to share the special moment with his family.

The 1.93m midfielder has been a fan-favourite ever since being drafted by the Pies with the No. 30 selection at the 2020 AFL Draft after photos of his glorious mullett impressed fans.

He is the Magpies’ fifth debutant this year.

AFL: Reigning Premiers Richmond have sent a timely reminder to the rest of the competition that they are from a spent force, after a second half surge saw the Tigers overwhelm…

AFL: Reigning Premiers Richmond have sent a timely reminder to the rest of the competition that they are from a spent force, after a second half surge saw the Tigers overwhelm the Western Bulldogs.