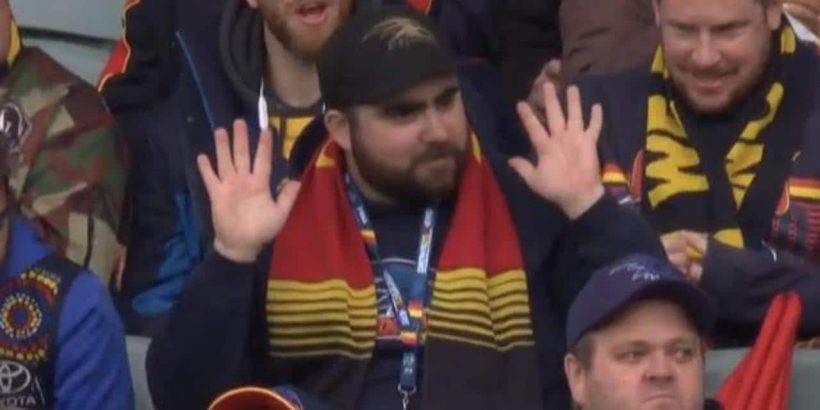 Adelaide Oval’s spectators have done their best to abide by the South Australian health advice, avoiding the Sherrin by all means necessary on Saturday evening.

On Wednesday, South Australia’s chief public health officer announced the Collingwood Magpies players and staff would be granted exemption to fly into Adelaide ahead of their Round 12 clash against the Crows.

But Professor Nicola Spurrier made a bizarre plea for spectators, telling fans not to touch the footy and “duck” if it comes flying at them.

“If you are at Adelaide Oval and the ball comes towards you, my advice to you is to duck and do not touch that ball,” Spurrier said.

She later reiterated the Sherrin was being fondled by “sweaty men” and advised people to sanitise their hands if they touched it “before eating your chips”.

When the footy flew into the stands following a Josh Thomas goal in the opening term, a cheeky spectator quickly raised his arms when the Sherrin landed in his lap.

He did the Health Officer proud 😍👏

“He didn’t take the advice of the chief health officer there, did he?” Fox Footy commentator Anthony Hudson asked.

Hawks legend Jason Dunstall responded: “No, he did. He’s got his hands up. He said, ‘I’m not touching it’.”

Another woman was filmed ducking out of the footy’s way in the first quarter, her terrified facial expression amusing fans watching from home.

ABC sportscaster Corbin Middlemas tweeted: “If we don’t get some spectacular scenes of Crows fans jumping out of the way of the footy today, then they have no sense of humour at all.”

I find myself watching Collingwood v Adelaide, not because I’m interested in the game, because I want to see how many fans dodge the ball #AFLCrowsPies

After Collingwood stormed to a 23-point lead at quarter-time, the hosts managed to reduce the margin to just 11 at three-quarter time.

Adelaide’s players will be required to undergo two days of quarantine after Saturday’s match.