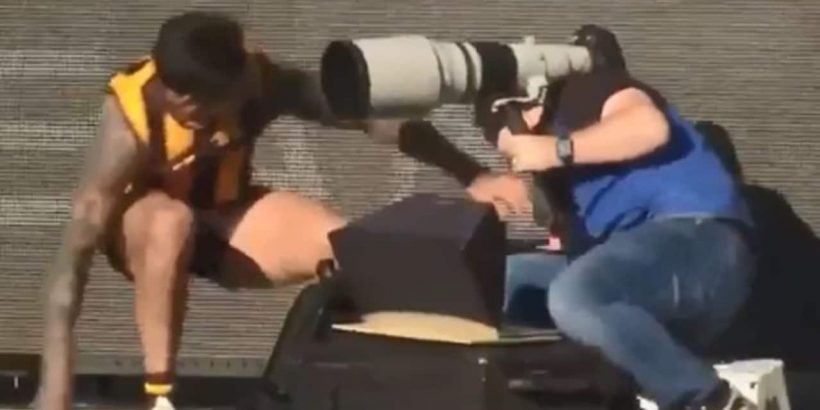 Hawks star Chad Wingard has taken a hilarious tumble after admiring his own good work early in Hawthorn’s clash with North Melbourne.

Wingard has a long track record of producing moments of magic – but his effort in the first quarter in Launceston impressed even himself.

The former Port Adelaide star got caught out when he was checking out his own good work when he threaded a needle from the boundary on the run with a slick drop punt across his body.

Chad Wingard has a bag of tricks.Source:Getty Images

Wingard continued to jog with his momentum after the kick, but he suddenly collapsed after he got caught soaking in his kick instead of looking where he was going.

He tripped over the top of a cameraman on the sideline before falling onto his butt and giving the broadcaster a sheepish pat on the back as he got back to his feet for the re-start of play.

Chad Wingard with the drop punt from the impossible angle 😮#ColesGoals | #AFLHawksNorthpic.twitter.com/ioeOJPvZ1W

“Not a great investment if you’re taking out the cameraman. Traditionally, they don’t look after you with the shot, but he would have great vision of this,” North Melbourne great David King said on commentary for Fox Footy.

AFL: North Melbourne great David King has spoken about his disappointment over the Kangaroos wanting to talk to the AFL to get a priority pick in the next draft….

AFL: North Melbourne great David King has spoken about his disappointment over the Kangaroos wanting to talk to the AFL to get a priority pick in the next draft.

“I mean, that was an unbelievable finish. Going at pace, he assesses quickly that it’s Campbell chasing him, the ruckman, (who is) probably not going to make the ground, so he has a quick look in and says nothing obvious, nothing clear, coach is not going to drag me if I have a shot here and miss, I’ll have a go.”

Bulldogs legend Brad Johnson added: “He was getting ready to celebrate with the crowd and the cameraman got in the way.”