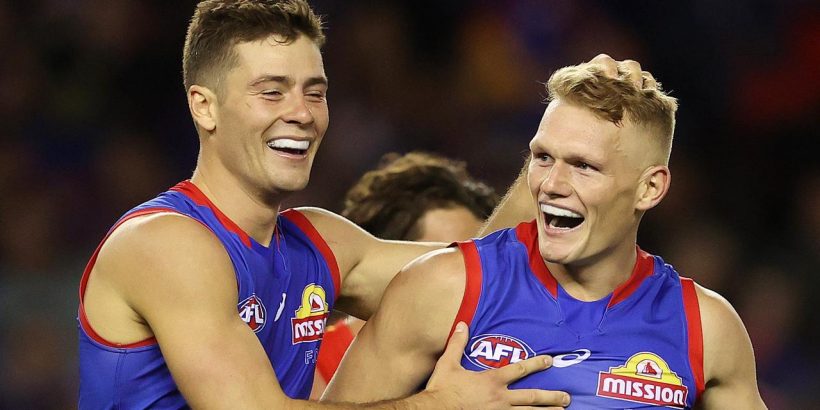 The Western Bulldogs’ premiership tilt has been dealt a major boost with star midfielder Josh Dunkley in the mix to return from a serious shoulder injury next week.

After a superb start to the season, Dunkley dislocated his shoulder in the Dogs’ win over GWS back in late April, sidelining him for over two months after he required a shoulder reconstruction.

However, in the past few weeks, the midfielder has ramped up his recovery, putting him right in the frame for a return next Saturday against Gold Coast.

Coach Luke Beveridge confirmed he’s on track for the trip north next week adding another string to the bow of their already deep midfield core.

“We think he will be available next week,” Beveridge said.

“We’ll see what happens next week with selection and hopefully we can get him back in pretty quickly.”

In an added boost, Dunkley looks set to be joined by key forward Aaron Naughton who is on track to return from concussion.

Naughton was substituted out of the Bulldogs’ win over North Melbourne last week after he landed heavily on his head in a marking contest.

Beveridge said the high flying forward was doing fine and believes he will be right to go in a week’s time after clearing the 12-day concussion protocol just before their trip north.

“He’s fine, even after the game with the boys talking and reflecting about the game he remembered most of it,” Beveridge said.

“We’ll always be conservative in those instances and he hit his head on the ground, but he’s fine and we see no reason why he won’t play the following week.”

Before the Bulldogs can welcome back their star duo, their focus turns to this Sunday’s clash against fellow finals contender Sydney at Marvel Stadium.

The Swans, who have been one of this season’s great improvers, are fresh off a 92-point thrashing of West Coast last weekend and Beveridge is wary of the threat they possess.

“They’ve got a few scalps this year too, they’ve been impressive, they’ve got a really good blend and a good mix and John and all his crew have them playing a really exciting brand,” Beveridge said.

“They’ll be a very challenging opponent and we are finding that every week, we thought North Melbourne made some leaps and bounds from the last time we played them.

“So Sydney after that big margin down at the Cattery, they’ll be full of beans and confidence so we are expecting them to come out and put us on the back foot.”