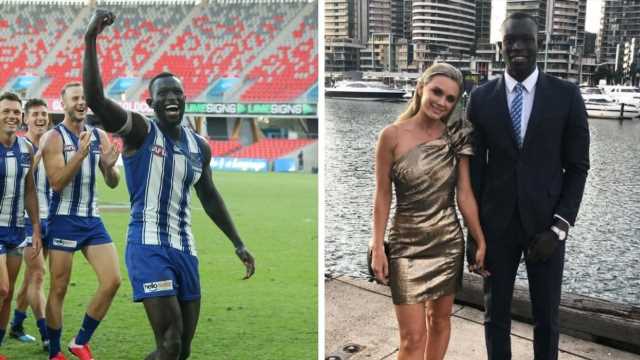 Majak Daw is excited to link up with his younger brother, and former Kangaroos teammate Brent Harvey, after signing to play footy with North Heidelberg in 2021.

Unable to secure a second chance in the AFL after being axed by North Melbourne at the end of last season, Daw was then rocked on the personal front as his relationship with the mother of his son Emily McKay ended.

But he’s begun the New Year on a bright note by signing to play with the Northern Football League club in Victoria.

“Pumped to play alongside my brother and my good mate Boomer this year,” Daw wrote on Instagram.

Daw and McKay celebrated the birth of their son, Hendrix, last year as the footballer continued to make his slow recovery towards the AFL.

The ruckman was hospitalised in December 2018 after he fell from the Bolte Bridge in Melbourne — he broke his hips and pelvis during the incident.

The 29-year-old’s comeback was delayed further after he tore a pectoral muscle during a gym session in May.

But Daw finally made his highly-anticipated return to the AFL in August, facing the Adelaide Crows at Marvel Stadium in round nine.

Daw marked the fairytale moment with a goal in the fourth quarter, which remains a highlight of the 2020 premiership.

McKay posted a heartfelt message to Instagram after the match: “Every nurse, doctor and surgeon we met along the way. Words can’t describe how grateful we are and how amazing you are.”

Unfortunately, Daw was one of 11 players advised in September they would not be offered a new contract.