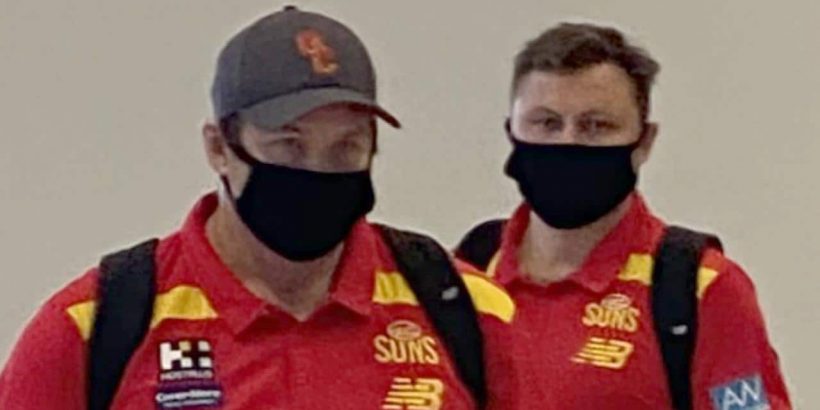 The AFL’s 18 clubs are bracing for a flurry of fixture changes after Queensland’s COVID-19 cluster forced a snap lockdown in Greater Brisbane this week.

Queensland recorded eight new coronavirus cases on Tuesday, with experts suggesting Brisbane residents may be required to remain in lockdown through the Easter long weekend.

Clubs were also reportedly told they should ensure players have weights and fitness equipment in their homes in case of a snap lockdown.

The Gold Coast Suns escaped Queensland on Tuesday, travelling to Adelaide on a chartered flight before any strict travel restrictions were introduced.

Friday’s clash against the Adelaide Crows is therefore expected to go ahead as scheduled, but the Suns’ round four home game against Carlton is in jeopardy.

The Gold Coast recorded its first positive COVID-19 case in 11 months this week after a male “entertainer” returned to the city following a hen’s party in Byron Bay.

As a result, the Suns’ 33-player touring squad could be away from home for the foreseeable future.

“COVID has impacted Round 3 of the AFL season and we anticipated this would occur,” Suns football boss Jon Haines told reporters on Tuesday.

“We flagged publicly and certainly internally during pre-season that we felt that at some point COVID would impact the AFL season.

“We have some lessons learnt from the AFLW and how they handled that and we have taken those lessons and are open-minded to whatever the options may be.

“Initially our focus is on Friday, but if it means we are here for a period of time we are excited by that and looking forward to that.

The Suns and Carlton are scheduled to face off at Marvel Stadium in Round 22, meaning the AFL could flip the fixtures if required.

If that change is implemented, the Blues would have the luxury of playing their opening 10 games of the 2021 premiership in Melbourne.

“It’s a collective effort with COVID. Different teams have been impacted by it in different ways last year and certainly that’s going to be the case this year,” Haines said.

“Queensland played its role last year and I’m sure other states will get a different opportunity throughout this year.”

As revealed by Fox Sports reporter Tom Morris, the round five match between Essendon and the Brisbane Lions is causing “the most angst” for AFL officials.

The two clubs are scheduled to play at the Gabba on April 17, but finding an alternate venue is proving difficult.

“Although Essendon hasn’t been told anything yet, the Bombers are expecting this game could potentially be moved away from the Gabba. But it can’t be at Marvel Stadium and it can’t be at the MCG because there’s games that day as well,” Morris told Fox Footy’s AFL Tonight on Tuesday.

“Another option is for both the Brisbane Lions and Essendon to have a bye in Round 5 and then in Round 13, when they’re meant to have byes, play against each other again. It just pushes the game back a little bit, albeit they wouldn’t be too happy to have byes in Round 5 – they probably want byes halfway through the season – but it might be something necessary just to get the season away.

“Either way, the AFL is telling clubs to continue as planned, not to panic, to listen to their advice. But there’s no doubt this is a moving beast and Essendon, Brisbane, Gold Coast, Carlton – they’re all at the centre of it.”

Depending on the nation’s COVID landscape, AFL teams will still be expected to play 11 home games in 2021.