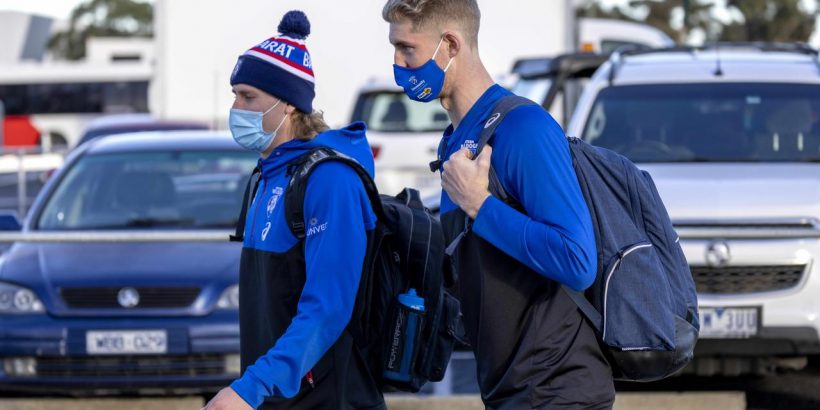 Western Bulldogs coach Luke Beveridge spent Wednesday night creating a WhatsApp group with his players who were being rushed to Queensland on Thursday morning as preparations for his team’s clash with the Gold Coast Suns took a turn he wasn’t expecting.

That group included star forward Aaron Naughton, who will return from a concussion, and on-baller Josh Dunkley, who will play his first game since round 6 after having a shoulder operation.

Beveridge said he expected the Bulldogs would return to Melbourne after the clash, but the constant Covid change demanded conversations that weren’t just about football as players left families in lockdown.

“Some of these aspects test your resilience. They’re the elephant in the room a lot of the time, so do you bring them out into the open ? I think you do at times,” Beveridge said on Friday.

“It wasn’t confirmed until 9.30pm on Wednesday that we would be leaving early. I quickly created a WhatsApp group for the players who were picked, which was a fair way out from when we would normally finalise selection. Thankfully, I’d made all the phone calls with players who were coming in and out.

“I didn’t want anyone waking up not knowing they needed to be at the airport. That’s something you‘ve got to deal with.

“Ultimately, the best way to deal with it is to laugh it off a little bit, and I think the boys do that pretty well.”

Josh Dunkley is back after a shoulder operation. Picture: Michael Willson/AFL Photos via Getty ImagesSource:Getty Images

Dunkley was in brilliant form before hurting his shoulder and is being rushed straight back into the senior side without a VFL warm-up.

“We expect that it might take Dunks a little bit of time to get on his feet,” Beveridge said.

“That might take one or two weeks to get back.”

Number one draft pick Jamarra Ugle-hagan also gets a second crack after the young forward took just one mark and didn’t trouble the scoreboard in his AFL debut last week against Sydney.

Beveridge said there were two elements in picking Ugle-Hagan again.

“My old mentor and first coach John Northey said if you struggled in your first game to give you another one,” he said.

“This week also gives us an opportunity to see Brucey (Josh Bruce) and Naughts (Aaron Naughton) and Marra play with Tim (English) up forward and see how it looks.

“Marra will be better for the experience. There’s always a little bit of self doubt that you are on an edge in your first one.

“I’m sure he’ll be a little more settled, and hopefully he can get into the game early.”