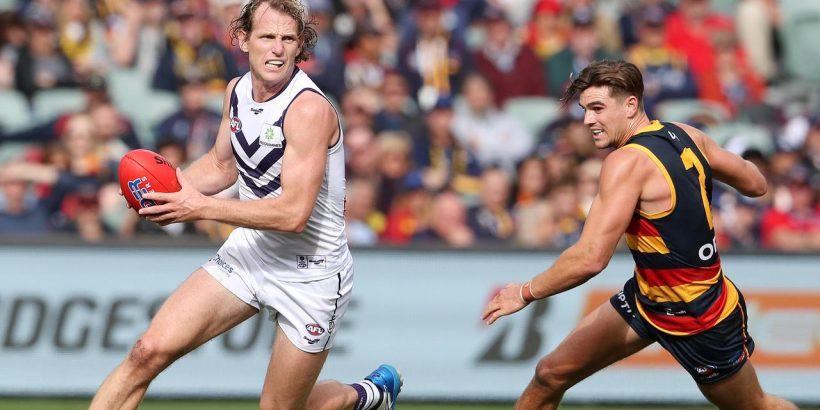 Fremantle coach Justin Longmuir claimed the “rest of the competition” was now realising the depth of veteran David Mundy’s talents after he sparked the Dockers to victory over Adelaide on Sunday.

With the game on the line, Mundy amassed nine possessions, two tackles and nailed a goal in the final quarter to have a significant impact in the Dockers grabbing their first victory at Adelaide Oval in six years.

Longmuir also heaped praise on Mundy for his off-field influence at the club, along with that of champion midfielder Nat Fyfe.

“Our supporters understand he has been a very good player for a long period of time and the rest of the competition is catching up now,” Longmuir said.

“He is a wise, calm head. When things are moving quickly, he is able to steady us and move at a slower pace.

“The way he is invested off the field in our young players in what we are trying to do, he has been like a second coach and mentor for them.

“I’m proud he has been able to perform the way he does on the field because that just complements what he is doing off the field. He is a leader in the true sense.

“Him and Fyfey are doing a good job with the younger mids and paving the way for them.”

Longmuir noted there had been “lots” made of the club’s home and away form and a priority leading into the game was to ensure his players did not buy into the subject.

He said it was all about the players being able to look each other in the eye after the game knowing they had all played their role.

“Whether we got beaten or not was irrelevant really,” he said.

The previous two weeks had been a step in the right direction, according to Longmuir, although he said there were still plenty of areas requiring improvement and consistency.

David Mundy had a Sunday to remember.Source:Getty Images

“He gives you a migraine, not a headache,” Nicks said. “He was big, not just with the ball, but with the tackling pressure.”

Nicks lamented a lack of execution and fundamentals and said the side was five per cent off in those areas.

Nicks said the Crows felt they were in a handy position at three-quarter time and they challenged the opposition for eight to 10 minutes.

“To their credit, they stood up and their backs were really strong,” he said. “There were too many intercept marks, our final third efficiency was really poor.

“When it counted they stood up at the centre bounce and we went down 1-6 in the clearances in the last 10 minutes. That was the difference, we were coming from our back 50 and not able to get it done.”