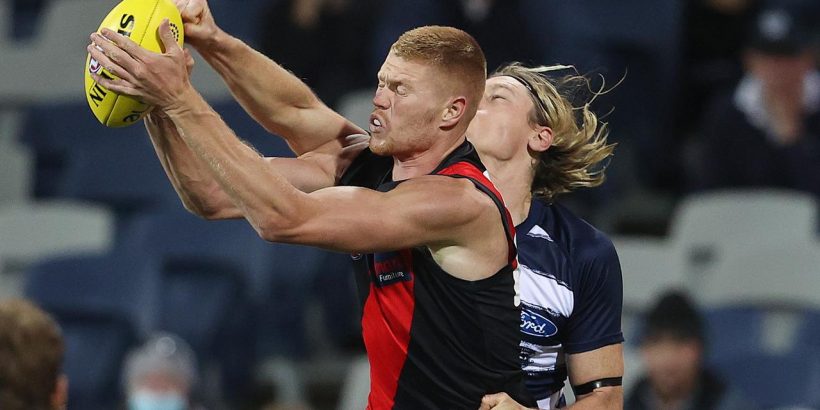 Essendon coach Ben Rutten has made a bold statement for his first team picking five new players as the Bombers look to turn around a turbulent 2020 season.

After spending a year as coach-in-waiting alongside John Worsfold, Rutten said it “feels like my first game again” as he takes control of the team for the first time in the premiership season.

“There‘s a good combination of nerves and excitement. I’m really looking forward to seeing what the guys can do,” he said on Thursday.

“I feel like we‘re well prepared and certainly looking forward to being back at home in front of our fans.”

After the departure of both Joe Daniher and Orazio Fantasia the Bombers had to find some goalkickers and both former Gold Coast forward Wright and Jones, who was drafted in 2019, could help fill the void.

Cox is the only one of Essendon’s three top 10 picks from last year’s draft to earn a Round 1 start.

Rutten was full of praise for the work the tall wingman had put, including least year when the Under 18 competition was called off because of the pandemic.

“Nik Cox hasn’t played a proper game of footy for 18 months so it is a huge effort,” Rutten said.

“He has presented and he’s done nearly every session of training and he has really built his game over the last couple of weeks as well.

Truck's excited to unleash our debutants 👊

“I‘m looking forward to what he can do, not only this week, but throughout the season he will keep getting better and better.”

Rutten said Jake Stringer, who is recovering from a leg injury, would be eased back through the VFL while captain Dyson Heppell, who only played three matches last season, would have a new role across half-back.

“He played a lot of footy back there in his early years at Essendon and he‘ll provide a lot of experience and a bit of calmness back there for our defensive unit,” Rutten said.

Amid reports defender Michael Hurley may not play this year as he battles infections in his leg, Rutten said the veteran was around the club “more and more” and would be integrated back in to the footy program.

“He’s got so much to offer, it’s about how we can best use him when he’s not playing,” he said.