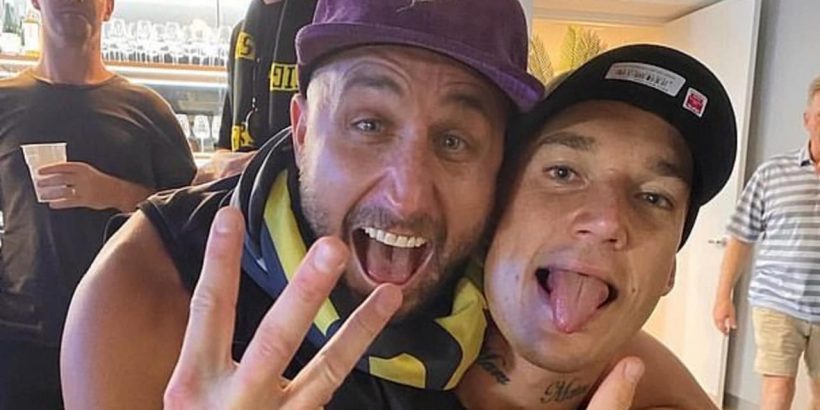 And on Wednesday night, St Kilda champion Nick Riewoldt and Fox Footy viewers were given a rare insight into Richmond superstar Dustin Martin and his love for the game, the Tigers and his family.

Watch the 2021 Toyota AFL Premiership Season. Every match of every round Live on Kayo. New to Kayo? Try 14 Days Free Now >

From the off-field sacrifices he’s made for on-field success, the tribute that left him emotional, his favourite AFLW player and his “dream” to win a flag with his dad in the grandstand, these were the best moments of Fox Footy’s Nick & Dusty – One On One.

As many AFL players have attested to, Martin at times struggled throughout the 2020 season where he spent so much time inside a Queensland hotel room.

But the Brownlow Medallist said he always tried to keep perspective of the situation after relocating from Melbourne.

“To be honest, I had (tough) moments where I was stuck in a hotel and we couldn’t leave, but I just kept coming back to how grateful I am to go out there every week and play the game that I love. Just to sit in that space of gratitude and appreciation to be able to do what you love,” Martin told Fox Footy.

RELATED: Martin and Munster the scallywags we needed in 2020

“Not being able to do anything, you pretty much just sat in a hotel, but we made it fun … We knew that people back in Victoria were doing it extremely tough, so we didn’t have it too bad. It just ended up being like a school camp, we all love being around each other, there were so many funny and fun moments. It’s certainly a year that we’ll always remember and be grateful for.”

Martin would, again, play a key role in Richmond’s third premiership triumph. Not only would he win a third Norm Smith Medal, he’d take out the Gary Ayres Medal for the AFL Coaches’ Association’s best finals player, solidifying his reputation as one of the AFL’s greatest big-game players ever.

HITTING PAUSE ON THE PARTY

Martin stayed in Queensland for several weeks after the Tigers’ triumph. And after a few weeks of celebrating, he found himself reflecting on the feats he and his club had achieved.

“It’s funny, life moves so fast and I think it’s super important to sit down and reflect on those things,” he said

“I remember I was on the Goldy (Gold Coast) after the Grand Final probably three weeks after the game – it’d obviously been a big couple of weeks celebrating – and I just went and sat out on the balcony. I just took a moment to reflect on it and ring a few people from the club, send out a few texts.

“(The texts were) just like ‘can you believe it’. There’s just a lot of love and thanking certain people and reaching out to teammates saying: ‘Can you believe what we just did, how special was that?’”

Martin grew up in Yapeen – a small town just south of Castlemaine – and was drafted to Richmond in 2009 out of the Bendigo Pioneers.

While he has yellow and black blood pumping through his veins now, he was a mad St Kilda supporter as a kid.

As a young Saints fan, he idolised legendary midfielders Robert Harvey and Lenny Hayes, while he also had great admiration for Geelong skipper – and fellow Bendigo Pioneers product – Joel Selwood.

That led to some bold draft night comes from Martin.

“My manager at the time, me being a young kid from the bush, he said ‘if you get asked this, just say this’,” Martin said.

“I remember I said I ‘play a bit like Joel Selwood and Lenny Hayes but with better skills’ – and I remember playing against the Saints that year and they sure let me know about it.”

Martin also opened up on his “dream” of having his father attend another Grand Final win at the MCG.

The 29-year-old’s father Shane was deported to New Zealand in 2016 under Australia’s Immigration Act on the grounds of bad character, as the country launched a fresh crackdown on bikie gangs.

But Martin said he still held hopes his dad could see him play live in a Grand Final before his career is over.

“It’s been a massive challenge, but it is what it is,” he said.

“I love my dad and he’s made me the man I am today. I’ve got full belief he’ll back here to watch us win another flag.

“That’s my dream to be able to have the old man up there (in the grandstand) with the rest of my family and watch the Tiges win another flag.”

‘IT MAKES ME A LITTLE BIT EMOTIONAL’

Martin is not only one of the game’s most celebrated and recognised figures, but he has also won universal respect for his on-field ability and consistency.

No doubt more importantly for Martin, he’s also one of the most respected players and leaders internally at the Tigers.

Teammates Jack Riewoldt last week gave Martin a wonderful endorsement, as both a player and a person.

“I’m really proud of who he’s become,” Jack Riewoldt told Fox Footy’s One Night In Brisbane last week. “The growth in him as a person and a mate, I couldn’t be more proud of what he’s done and it’s reflective on who we’re going to see going forward as well.

“The key to his success is inner belief and the fact he’s happy to be unique and he knows what he’s good at. He will get everything he deserves post-footy with the accolades. He’s a great person and a great leader.”

Martin was shown video of Riewoldt’s comments during his interview this week.

“It makes me a little bit emotional,” a humbled Martin said when responding to Riewoldt.

“I love Jack and to be honest I love the footy club and everyone in there. I love going in there, the culture we’ve got at the footy club from the top down – it’s a really special place to be. I’m beyond grateful to be part of that.

WHEN DUSTY BECAME A SUPERSTAR

Before entering the greatest modern-day player conversation, Martin was a gun midfielder that racked up a lot of the ball. But he wasn’t the same game-breaking, premiership-turning player the footy world sees him as today.

He was also part of a club that had been starved of success for decades.

But Richmond’s resurgence coincided with Martin’s emergence as a superstar.

He said there wasn’t one moment or turning point that prompted his rise, but rather he “found a better balance in my life”.

“It took me a lot longer to grow up then everyone else,” he said.

“The first part of your career, you’re just happy to be on an AFL list and go out and muck around. But I think it just comes with age.

“I thought ‘I’ve got a really good opportunity here, I don’t want to have any regrets when I get to the end of my career ‘. So I’m just making sure I put my best foot forward to get the most out of it.”

Asked what he’d specifically changed, Martin said with a cheeky smile: “Probably going out less … nah it’s a bit of everything. You don’t want to party too hard because it might take away some energy to be at your best, not just in a football sense but be the best in your life. If you’re going out too much, I don’t have the energy to be able to be the best leader at the footy club.

“There’s a bit of that and finding things that work for me and things that make me happy.”

Martin said he’d placed a big emphasis on mindfulness – for footy is “just as much a mental game as it is a physical game”.

“I just focus on becoming calm and coming back to what makes me great and not worrying about any other distractions outside of the footy field,” he said.

“There’s so many things that can go on in your head, but when you just come back into the moment, that’s when you play your best footy.”

Martin also said he was now appreciating the game more and found himself watching more matches than the early stages of his AFL career.

“I was probably one of those blokes where it was uncool to watch footy, so I was like ‘nah I hate watching footy’. But the older I’m getting, the more I love watching the footy,” he said.

“I’ve been really getting into our girls side – it was good to see them have their first win the other week.”

Asked who his favourite AFLW player was, Martin said: “Ellie McKenzie, she’s our No. 1 pick. She’s a jet.”

Upon being drafted by Richmond, Martin quickly adapted to the city lifestyle.

But he now appreciates the country lifestyle more, hence why he enjoys escaping Melbourne “as much as I can and get a little break”.

“It’s funny, I used to hate getting back into the country, but I’ve done a bit of a 180 and I really enjoy getting back out there and enjoying the simple country life,” he said.

“I was getting around in my cowboy hat the other day, so that was good fun.”

Asked if he had any plans for life after footy, Martin said: “It’s a tricky question and something that you get asked a lot. I’m still trying to find my way and what other passions I’ve got outside of the game.

“I’ll just keep playing around with different things and I’m sure something will come to me at the right time.”