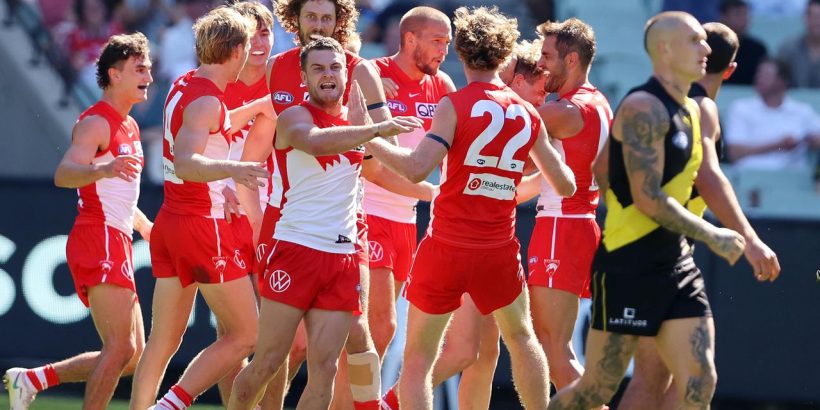 The Tigers have left the MCG with their tails between their legs after losing to the Sydney Swans by 45 points on Saturday.

On an unseasonably warm Melbourne afternoon, the Swans turned up the heat on the reigning premiers from the first bounce.

Sydney dominated inside 50s early, but inaccuracy on goal meant they headed into quarter-time with only an eight-point lead.

The Tigers struggled to keep up with the enthusiastic Sydney outfit in the second quarter as the visitors hit their stride even without star forward Lance Franklin.

Goals to Jack Riewoldt and Jason Castagna midway through the second term pulled Richmond back into the contest.

But it wasn’t enough to snatch the lead from the Bloods, who punished Richmond on turnovers and slotted eightin the second quarter to hold onto their lead at the main break.

Tom Papley was among the Swans’ best on Saturday.Source:Getty Images

Sydney showed no signs of slowing down from there and continued to dominate in the second half. Richmond fought back in the fourth to close the gap slightly, but it was too little too late for Damien Hardwick’s side.

Chad Warner, Tom Papley and Callum Mills guided the visitors to their win, which will go down as one of Sydney’s most memorable of recent times.

It was a rare capitulation for the Tigers, who conceded 100 points before three-quarter time for the first time since 2017.

Pundits were stunned by the Swans’ effort online, labelling the performance “outrageous” and “unbelievable”.

“Enormous pressure from the young Bloods and capitalised on the dominance through the midfield in that 2nd term,” Swans legend Jude Bolton tweeted.

The win continues Sydney’s unbeaten run in 2021. They’ll look to make it four victories in a row when they face Essendon at home next Thursday night.