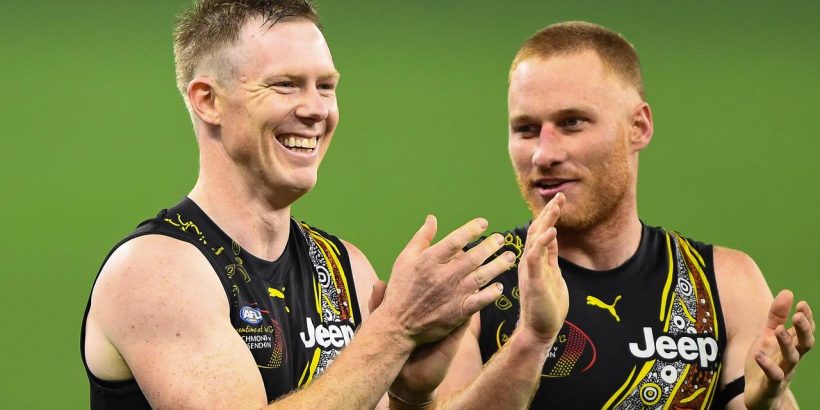 Richmond opted to return to Sydney straight after Saturday night’s win against Essendon, instead of spending the week in Perth, where they will play against West Coast next Sunday.

The Tigers’ Round 14 clash against the Eagles was brought forward by a week by the AFL with Melbourne still in lockdown due to Covid-19.

Richmond chose to make its players take two extra flights across the country so they could enjoy the more relaxed Covid-19 regulations put in place by the New South Wales Government, instead of being in full quarantine in Western Australia.

Coach Damien Hardwick said the Tigers players were thoroughly prepared for the challenge the week poses for them.

“The AFL, West Coast, and Richmond did a wonderful job of thinking through the process and did it pretty smartly,” he said after the win over the Bombers.

“West Coast want to play the game at home, and the challenge for us will be to fly back over and try to knock them off on their home deck. Our players are thoroughly prepared.

“Our guys have done this. They did the Brisbane job last year and they look at it as a positive to be around the group and connect.

“That’s really exciting for us. Our players quite enjoy the aspect of going away and spending some time together. That’s not to say we don’t miss home and we don’t miss people we’ve left at home.

“But the reality is our guys travel very well, we think it’s a strength of our program, and no doubt that keeps us in good stead moving forward for the remainder of the year.”

There was an ominous precision in the way Richmond went about sealing its win against Essendon in the Dreamtime in Perth clash at Optus Stadium on Saturday night.

The Tigers stepped up a gear when challenged in the final term by the Bombers. After giving up the first four goals of the quarter, and the lead, they kicked seven consecutive goals to win by 39 points.

It all happened very quickly.

Hardwick then warned the competition that he thinks his side “can certainly get a hell of a lot better”.

The reigning premiers’ record improved to 7-5 with the result and their consecutive wins gives them some breathing space between from the sides outside of the eight.

“We hope so. It’s just a matter of ticking over the wins. Our side is building. They’re starting to come together from a connection point of view,” he said.

“They haven’t played the majority of the season together, so it takes a bit of time to gel. That slowly happened tonight at various stages.

“But we’ve got to get better in some areas.

“We’ve got a little bit of a way to go with how well we want to play. We’re going okay, but we can certainly get a hell of a lot better.”

Kane Lambert is likely to return for the game against West Coast, having not played since Round 6 because of a calf injury.

While ruckman Toby Nankervis, sidelined with a knee injury, won’t play in Perth next weekend, Hardwick said he was progressing a lot better than they originally thought. He could return a lot earlier than the 4-6 weeks he is currently listed as being out for.

The 2021 AFL season is quickly turning into one of missed opportunities for Essendon.

Regardless how the game played out, the Bombers returned to Melbourne on Sunday after losing to Richmond by 39 points in the Dreamtime in Perth clash at Optus Stadium.

They have a 5-7 record and, at best, will finish Round 12 one game outside of the top eight.

A review of their season so far during their Round 13 bye will show how they are blowing their chances to play finals this season.

After kicking 3.6 to 4.1 in the third quarter, the Bombers kicked the first four goals of the final term to take the lead midway through the last term.

The Tigers rallied, as good sides do, and booted the last seven goals of the game. Despite going forward once more than the Tigers, the Bombers had four fewer scoring shots and kicked seven fewer goals.

Coach Ben Rutten said his side needed to start taking those opportunities.

“Our ability to take those opportunities … I thought we created enough opportunities, but we’re not good enough to be able to nail them against the best opposition,” he said.

“This week, we not only didn’t take the opportunities, but we gave it back to them and their effectiveness with the ball was at a level we haven’t seen this year.

“Anytime we made a mistake, or they forced a mistaken, they were able to punish us on the scoreboard.

“That’s the level we need to get better traction from our attack. We created a lot of opportunities, we’re just not good enough to finish off.”

Missing opportunities in attack has cost them already this season.

Before their run of three consecutive wins, ended by the Tigers, the Bombers lost to Greater Western Sydney by just two points having kicked a wasteful 3.5 in the second quarter.

They also lost to Carlton in Round 7 and Hawthorn in Round 1 having had more inside 50s than their opposition.

In both of those losses, to the Blues (by 16 points) and Hawks (one point), they also led at halftime.

In the three-point loss to Sydney in Round 4, they led by one point at three-quarter-time.

Rutten said the team believes they are good enough.

“There is enough belief there,” he said.

“They understand their best footy is good enough. We just weren’t able to do it for long enough which is an area we have to work at.”

The Bombers’ next game is currently scheduled against Hawthorn at the MCG in Round 14.

They will sweat on the fitness of Andrew McGrath who injured his knee in the first quarter of the loss against Richmond.

David Zaharakis also failed to finish the game against the Tigers due to hamstring tightness.