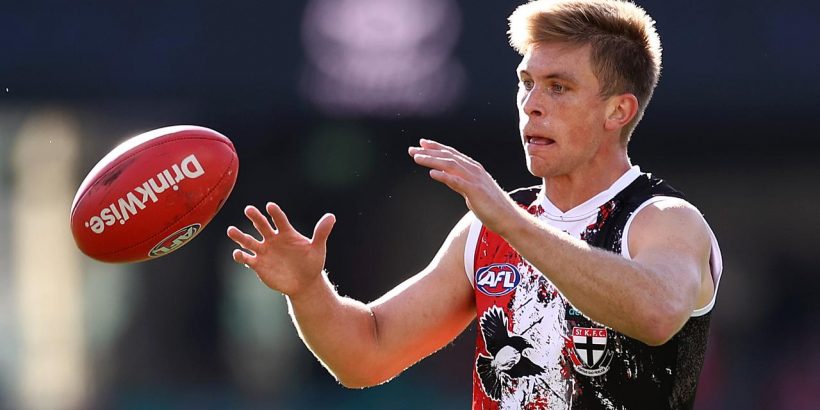 The baby St Kilda forward Tim Membrey missed a game in Cairns waiting for finally arrived, and both he and Seb Ross will return to play Richmond as the Saints move on from the nasty fallout over their decision to leave the team hub.

Ross particularly was the target of criticism after he and Membrey left the team, which had been relocated to Sydney, to return to Melbourne to be with their partners before the last start-loss to Adelaide two weeks ago.

It emerged the club did discuss whether to allow Ross to leave, while Membrey’s partner was due to give birth. That baby arrived on Wednesday.

St Kilda coach Brett Ratten said he had spoken to Ross – who posted a strong message on social media outlining his position – every day and both player and club were satisfied the situation had been dealt with.

“Everybody has looked at why the club didn’t respond; we were in a bye, people weren’t at work,” Ratten said on Wednesday.

“I’ve chatted with Seb pretty much daily on it, we have spoken a lot about it.

“The thing that happened on the Monday with everybody talking about it, they didn’t have the information about Queensland. We didn’t know we were playing there. We thought he might come back. There were so many different variables to that story. He is all good about it.”

Membrey will still play on Friday against the Tigers, after leaving training to be at the birth.

“This morning we were about to go into a meeting and (the) phone went off and it’s finally happening,” Ratten said.

“He might have to go for a bit more of a run tomorrow, but he’s done a heap of work when he was back in Melbourne anyway, so he’s fine.”

Ruckman Rowan Marshall will also return for his first game since injuring his foot in round nine, despite not getting a VFL game as a warm-up.

Ratten said his return could help take some of the pressure off young forward Max King as well.

“(Marshall‘s) probably underdone, slightly, but he’s a quality player and we need him to play,“ Ratten said.

“It‘s not just what that combination do in the ruck, but what ’Row’ and Paddy (Ryder) can do for Max (King) as well.

Finalists last year, St Kilda has slumped to 13th with a 5-8 record ahead of its showdown with the Tigers, who smashed them by 86 points in round five.

The Saints have begun an internal review dubbed “bridging the gap” to identify reasons for and address the drop-off this season.

Ratten said the players and coaches were working on improvement in communication, particularly after a mid-season honesty session, and hoped to see some results on Friday night.

“It’s something as a team, there are multiple things we need to work on. When you are not winning games and football and being where you want to be, you can pick a lot of things,” he said.

“Across the board, we are just chipping away at it. Whether we see the results come this week, next week, by the end of the year, it’s something we are going to push really hard for.”