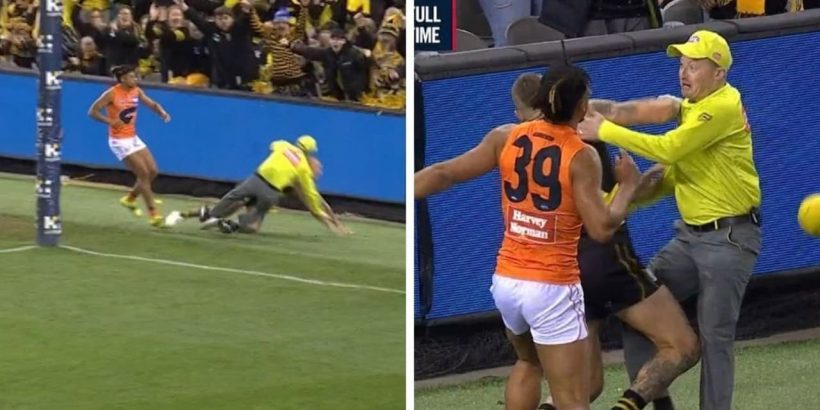 In the space of two seconds, Dustin Martin won the game for the Tigers, created another score review controversy and sent a poor umpire to the doctor’s office.

It was a moment of mayhem and the moment the Tigers defeated the Giants in a Saturday night thriller.

Martin’s goal came after he sprinted onto a loose ball that had bounced from a contest into the vacant goal square and appeared destined for a point before Martin got his toe to the ball right at the moment it had appeared to cross the line.

Dusty put the umpire on his backside. Photo: Kayo.Source:Supplied

While Tigers fans were nervously celebrating a potential goal, Martin’s follow through saw him charge straight into the goal umpire, who was sent flying backwards as a result of the collision with the two-time Brownlow medallist.

Replays showed the umpire, revealed to be cult hero Adam Wojcik, was helped back to his feet by Martin before he grimaced and grabbed his shoulder.

While the umpires sent the decision to the AFL Review Centre, the on-field umpire was heard calling on match officials to prepare for an emergency goal umpire replacement because the goal umpire’s shoulder had “popped out” during his incident with Martin.

By the time the AFL goal review officer had delivered the controversial verdict that there was insufficient evidence to take the goal away from Martin, Wojcik was being helped from the field with the injury. It was reported after the game that the goal umpire popped his own shoulder back into place.

It comes just one week after Wojcik became a cult hero for his fearless goal umpiring at the Gabba last week when he muscled in alongside players for a kick that went right to the line.

This time he is a cult hero for a different reason.

Martin was seen checking on the umpire as they both got to their feet and wandered over for a fist bump as they waited for the ARC verdict, but he was feeling no sympathy when interviewed after the game.

“It’s a bit of carry on from the ump I think,” Martin said before it emerged that the umpire had suffered a dislocated shoulder.

Fox Footy’s Gerard Healy praised the umpire, saying: “He has got a dislocated shoulder, he has stayed tough in the face of fire. He hasn’t even flinched this goal umpire, in two weeks he has turned himself into a cult hero”.

AFL: North Melbourne have their first win of the season after a fight back in the second half saw the Kangaroos kick clear of the Hawks in Launceston….

AFL: North Melbourne have their first win of the season after a fight back in the second half saw the Kangaroos kick clear of the Hawks in Launceston.

Martin finished with four goals as the Tigers sealed a crucial win to keep their spot in the top eight.

He was immense for the Tigers as the champion pulled his side back from the brink with four goals and 28 disposals.

The Giants kicked away to lead by 28 points at the 17-minute mark of the third quarter and looked to have all but wrapped up the game as momentum sat squarely with the orange tsunami.

But four goals in 10 minutes to finish the third term had Richmond just three points down and full of belief at the final change.

When the Giants kicked the first two of the last quarter it looked to be slipping away from the Tigers, but goals to Jack Riewoldt and Martin had them two points down with just minutes to play.

That’s when Rioli landed the knockout punch to leave the Giants’ season in trouble at 4-5.