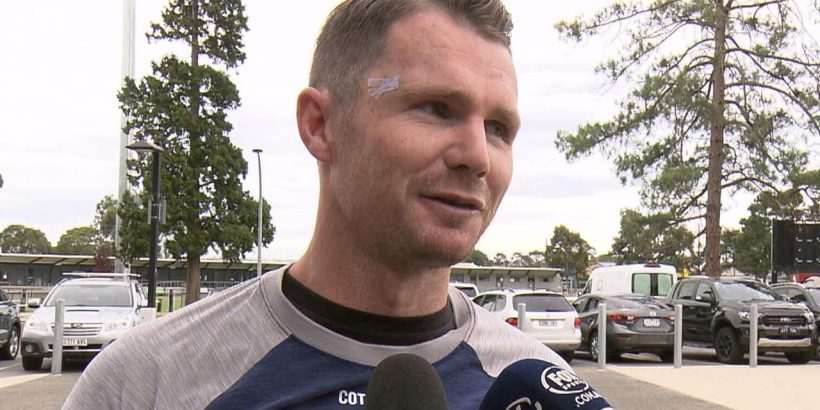 Geelong superstar Patrick Dangerfield says he was trying to protect himself in his collision with Adelaide’s Jake Kelly on Saturday.

Kelly was concussed and suffered a broken nose in the incident, which saw Dangerfield receive the most serious impact grading of severe from Match Review Officer Michael Christian.

AFL: Tom Morris breaks down how Patrick Dangerfield’s clash with Jake Kelly will be graded, looking back at a Nat Fyfe incident from 2014….

AFL: Tom Morris breaks down how Patrick Dangerfield’s clash with Jake Kelly will be graded, looking back at a Nat Fyfe incident from 2014.

Echoing Chris Scott’s words after the Cats’ shock loss, the 30-year-old suggested his contact with Kelly was merely accidental and not a bump.

“I think it’s easy to review something at 30 frames per second,” Dangerfield told television reporters outside GMHBA Stadium on Monday.

He was asked whether he had “a realistic alternative” to making contact the way he did, to which he replied “I didn’t think so at the time.”

The incident led to widespread debate across the weekend, with dual North Melbourne premiership player David King arguing the penalty should be four games on Fox Footy’s First Crack.

The MRO’s recommendation was that he deserves a minimum of three weeks, but the tribunal has the power to use its discretion based on arguments from lawyers on both sides.

Equally, both parties have scope to appeal the tribunal’s decision.

AFL: On the First Crack, David King says Patrick Dangerfield should get a four-week ban from the AFL Tribunal, calling for a crackdown on incidents that lead to head injuries….

AFL: On the First Crack, David King says Patrick Dangerfield should get a four-week ban from the AFL Tribunal, calling for a crackdown on incidents that lead to head injuries.

“I certainly appreciate and understand that looking after concussion and the head is extremely important.

The AFL updated its protocols regarding accidental head clashes after the 2018 season. Since then, any player who elects to bump has been deemed liable for injury caused, regardless of whether it’s a head clash or a shoulder to the head.

But Dangerfield’s answers on Tuesday indicate he will argue he never elected to bump and tucked his arm into his chest to protect himself in a split second decision.

“It’s a contact game but we also have to make sure we are looking after concussion and approaching that in the right way and respecting that,” he said.

“But it’s also a game that is played in 360 at high speed and it’s been a part of the game for a long period of time.”

If Dangerfield is suspended, he will be ineligible for the 2021 Brownlow Medal.