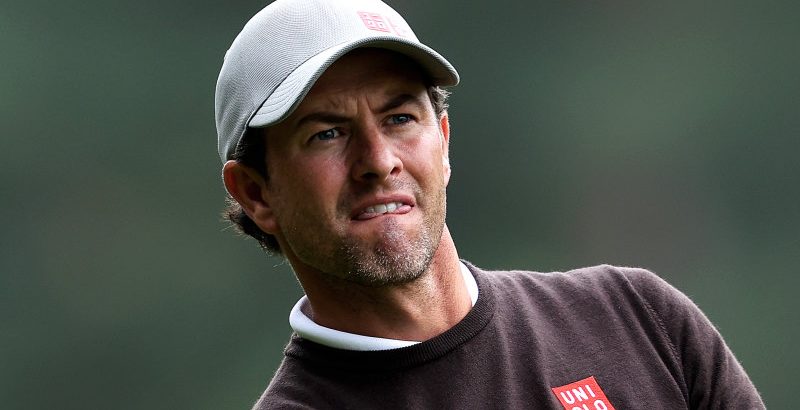 Wentworth, England: Adam Scott was pondering if it was worth playing in spectator-free events and with his game suffering accordingly this time last year. But on the West Course on Thursday in front of an appreciative crowd, he displayed his renewed appetite for the game as well as his improved form to shoot an impressive seven-under 65 in the first round of the BMW PGA Championship.

It left the Australian third on the leaderboard, one shot behind Kiradech Aphibarnrat of Thailand, Singha shirt sponsor and all, and Christiaan Bezhuidenhout of South Africa on a cool, still day which was good for scoring and also signalled the end of the hot spell that had prevailed in much of the country for most of the week. 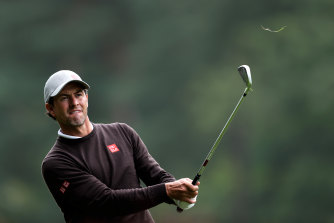 Adam Scott plays his second shot on the 9th hole during day one of the PGA Championship.Credit:Getty Images

Scott, who has slipped from No.6 in the world in August 2020 and was still on the slide after the British Open in July when he finished tied-46th and was disconsolate about his “mediocre golf”, had showed a flash of form at the Wyndham Championship in the US last month, when he finished tied-second after a play-off. He looks to have brought the feelgood factor back with him as he seeks a 12th win on the European Tour.

“It’s not been the easiest year on the course for me,” the world No.39 admitted later. “I’ve struggled to get momentum going, unlike today.”

The Australian gave himself birdie chances at the first three holes, taking the one at the second after hitting his tee shot to six inches and leaving the ball adjacent to the hole with putts from eight and 12 feet respectively on the other two.

“The swing was feeling good on the range so this was right in the centre of the green and I took aim,” he said of his nine-iron approach into the second.

He picked up another birdie at the par-five fourth, where his long eagle putt finished three feet past the hole before getting lucky with a wayward tee shot at the sixth which hit the trees on the right but returned his ball to the rough from where he found the front of the green and two-putted. He also gained shots at the seventh and ninth, the latter with a 30-footer.

Scott’s approach shot to the par-five 12th got lucky too, landing short, high and right of the green, kicking over the first bunker and falling into a decent flat lie in the second one and 15 yards from the hole. The escape shot to two feet yielded another birdie.

The big bonus of the round was when Scott chipped in wonderfully from 50 yards at the 15th after his original tee shot was found having also hit a bad provisional ball which would have taken some finding too. He hacked it out of the rough and towards the green. “It looked like I was going to make a seven or eight when I was leaving the tee box,” he admitted. “For that to go in for a three … you’ve got to take the breaks when you get them. It was nice to make the most of it and shoot a good number. ”

His only blemish came at the 16th, where he hit his approach through the green, but he made birdie at the 17th with a neat five-footer and he was close to holing a 100-yard lob-wedge approach at the par-five last for eagle, tapping in from three feet and a 65. “Overall, there was lots of good stuff, a couple of wedges I’d like to forget quickly, but the rest was really good, really solid,” Scott said. “There were a few good putts, I did everything fairly well today.”

The 2013 Masters champion was playing in the company of the English pair Matt Fitzpatrick (level) and Justin Rose, the 2013 US Open champion who did his early prospects of landing a Ryder Cup wildcard no harm with a five-under 67 and was fourth on the leaderboard overnight, alongside Masahiro Kawamura of Japan and England’s Laurie Canter.

Western Australia’s Min Woo Lee, the Scottish Open winner back in July, had a disappointing round of three-over par in the company of Bezuidenhout, who drained a long putt at the last for his 64 late on to join the early-starter Aphibarnrat at the top of the leaderboard.

Wade Ormsby had a one-over 73 and is another who needs a decent second round while Scott Hend, who finished in the top-10 last year when the tournament was crowd free, was coasting along at level par when calamity struck at the par five 4th and he took nine on what is one of the course’s easier holes thanks to a five-of-the-tee. He finished at six-over with a 78.

Sports news, results and expert commentary. Sign up to our Sport newsletter.