Los Angeles: Fifteen years after his first victory at Riviera, Adam Scott won the Genesis Open in Los Angeles on Sunday, and this time his victory is official. 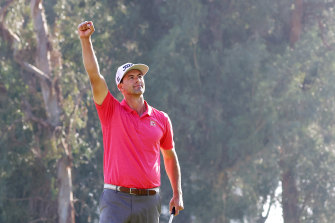 Rory McIlroy, who started the final round tied for the lead with Scott and Matt Kuchar, was not a factor after a triple-bogey at the same fifth hole that Scott bungled.

Scott finished at 11-under 273 for his 14th official PGA Tour victory.

That total does not include his  result at Riviera in 2005, which was deemed unofficial: because of conditions it was played over only 36 holes. He has also won 14 times internationally.

Tournament host Tiger Woods shot 77 and finished last among those who made the cut, 22 shots behind Scott.