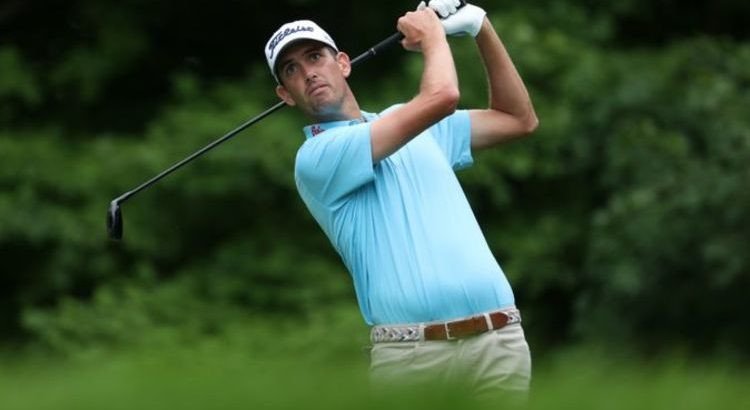 Piers Morgan plays a round of golf with Dan Walker

Justin Rose has missed out on a spot in the Fedex Cup playoffs in agonising fashion, after Chesson Hadley made a hole in one and shot a remarkable round of 62 at the Wyndham Championship to steal the final spot. Only the top 125 players in the Fedex rankings make it to the next stage as Rose came in 126th.

Hadley’s remarkable round came at Sedgefield Country Club in North Carolina. It represents the first time that Rose has missed out on the FedEx Cup playoffs since the event’s inception in 2007.

When Hadley finished his incredible round on Sunday he was still just outside the playoff places by one shot.

Rose had putts to secure his spot on each of the last four holes, however at the 18th he failed to sink a five-footer which let Hadley take his place. Hadley’s round took an incredible turn at the 16th hole, when made the first hole-in-one of his professional career.

Hadley celebrated by leaping in the air in a move he as since described as resembling a “flying baby giraffe”.

Speaking to the media after discovering his fate, a clearly emotional Hadley spoke philosophically about life as a golfer on tour.

He said: “This game is so hard. People have no clue. I feel like I don’t have a clue how hard the NBA is.

“But people have no idea how hard it is to do what we do. The travel, everything because you can be doing all the right things, and I guess that’s life, you don’t get rewarded for it.

“Golf is the perfect representation of life. It’s been frustrating, and then you have days like today and it’s amazing.”

Hadley was then asked how he planed to celebrate both his advancing in the FedEx Cup, which has a winner’s prize of $15million and a total prize fund of $70million.

The American replied that he intended to crack open a bottle of fancy wine that he and his wife had been saving for a special occasion.

He said: “We have enough to where something good will warrant a nice bottle opening.

“But it’s been a while since – we didn’t even open a nice bottle after Congaree because it didn’t feel like anything good happened there.”

Not only did the result mean he moves forward in that competition, it also guarantees his PGA Tour card for the following season- something he would have otherwise had to achieve via the finals of the Korn Ferry Tour next weekend.

The result will be extremely difficult to swallow for Rose, who now has to keep fighting in order to try and find himself on the roster for the Ryder Cup at Whistling Straits next month.

Having missed the four putts down the stretch, Rose said to the press afterwards: “The frustrating thing is I did what I had to do today to give myself a chance to win.

“I knew that putt at the 18th was probably to make the FedEx play-offs, but I guess finishing 126th was how this season was destined to end. As for the Ryder Cup, I’ve got to keep going.”

Rose will now play in the European Masters in Switzerland in a bid to impress Ryder Cup captain Padraig Harrington and secure the third wildcard for the team event.