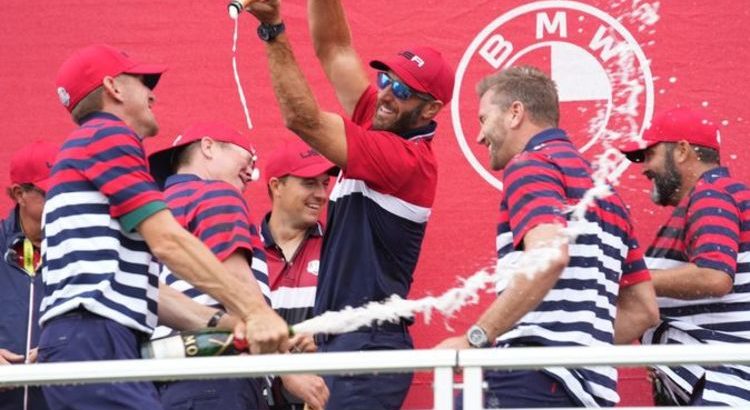 Dustin Johnson is eyeing more Ryder Cup wins after Team USA emphatically beat Team Europe last month, but as a captain as well as a player. Johnson, 37, followed in the footsteps of Lanny Wadkins (1979) and Francesco Molinari (2018) by winning a maximum five points from five matches at Whistling Straits, helping the hosts to a record-breaking 19-9 victory.

The world No 2 was the oldest player in Steve Stricker’s side but barring injury, or a dramatic loss of form, is almost certain to be in Rome in two years time as the Americans bid for a first win on European soil since 1993.

However, while it would appear the two-time major champion still has plenty to offer his country on the course, he’s already planning his involvement post his playing days, and has admitted to harbouring ambitions of captaining the side.

“Yeah, I would love to do it one day,” Johnson said, when asked about the role.

JUST IN: DeChambeau set new chapter in rivalry with ‘The Match’ confirmed

“I think it would be fun. I think I would be a good captain. Yeah, it’s something that I definitely would like to do at some point.

“I feel like I would let the guys just do their thing. I think that’s most important. The players are very good, I don’t need to tell them how to play a golf course or tell them what to do, but just put them in the situation where they can succeed.

“I feel like I’ve got a good relationship with most of the players out here, and hopefully I’ll be out here long enough to where I’ll know the guys that are going to be on the team.”

Johnson won the delayed 2020 US Masters last November, but his only 2021 victory came on the European Tour at the Saudi International, and he lost his place on top of the rankings to Jon Rahm.

Now however, he hopes his Ryder Cup heroics can be the springboard for him to regain his top form.

“Obviously got off to a good start last fall but, you know, didn’t play quite as well as I would have liked to during the year, but felt like I started to play a little bit better towards the end of the season,” he added.

“Obviously had a really nice Ryder Cup and hopefully can just build off of that a little bit. The game’s starting to turn around. Took the last couple weeks off, so trying to get back into the swing of things.”

The USA’a 10-point winning margin in Wisconsin was the biggest since Great Britain became Team Europe in 1979.

And Paul McGinley, who captained the Europeans to victory at Gleneagles in 2014, has warned that the hosts in Rome have an uphill task if they want to stem the tide.

“The first lesson is our opponent is stronger than they’ve ever been before,” he wrote, in his column for the official Sky Sports website.