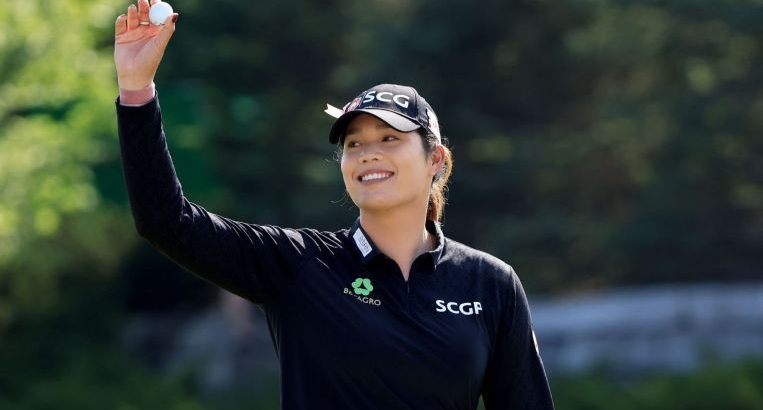 FIFE, SCOTLAND (FIELD LEVEL MEDIA REUTERS) – Ariya Jutanugarn of Thailand struggled on Saturday (Aug 14) in the third round of the Women’s Scottish Open, shooting a par 72 to fall into a three-way tie for the lead entering Sunday’s final round.

The two-time major winner took a three-shot lead into the third round, but she saw it evaporate in an up-and-down round that featured five birdies, three bogeys and a double bogey to end the day at 9-under 207 for the tournament at Dumbarnie Links in Fife, Scotland. Two of the bogeys came on the par-4 Nos. 17 and 18.

Capitalizing on Jutanugarn’s woes were Ryann O’Toole, whose eagle on No. 15 helped her to a round of 68, and Charley Hull of England (69), who tied the Thai at 9-under.

“I feel like tomorrow just have to play my own game. Today, I was thinking about the outcome so much, I don’t want to miss and make putts, and that’s why I end up today not playing so well,” Jutanugarn said. “So I think tomorrow just have to go back to like yesterday or first round and have good commitment and not really thinking about the outcome.” O’Toole, 34, is looking for her first LPGA Tour win. She has never been the leader or co-leader after 54 holes.

“For the most part, I’m very happy with my play,” said the American, who entered the day in a six-way tie for fifth place after rounds of 68 and 71.”Going into today, I just tried to do what I could to keep climbing and getting shots of the leader. Whatever happened, happened.” As for her game plan for Sunday?

“I definitely want that win. I think I stick to my game plan, one shot at a time, picking smart targets, not too aggressive lines and a few putts to drop.

I struggled all week with the speeds,” she said. “You get some downhill putts that don’t play as downhill as you think or you get some that run away from you and the uphillers, you definitely have to hit. If I can get a couple more to drop tomorrow, maybe I can be happy with the round.” Hull will apply a different strategy as she seeks her first victory since 2016.

“I’m just out there having fun, not thinking too much about golf,” she said.”Sometimes I’m too hard on myself. I concentrate on golf way too much.” Chasing the leaders on Sunday will be South African Ashleigh Buhai, who shot the day’s low round of 67, and Thailand’s Atthaya Thitikul (70), who are one back at 8-under and tied for fourth.

Anna Nordqvist of Sweden is alone in sixth place at 6-under for the tournament, but she squandered chances on Saturday. She finished birdie-bogey-birdie-bogey on the final four holes Saturday on her way to a 69.

Five players, including 2020 Tokyo Olympic Bronze medalist Lydia Ko, are tied at 5-under and in seventh place. Defending champion Stacy Lewis shot a 78 to put her in 69th place.